Spaceport America, the world’s first commercial spaceport, is nearing completion. David Wilson, head of Spaceport America Media Relations, recently told Space.com, “The spaceport Phase I construction work is now 90 percent done and . . . is on schedule to be done by the end of 2011.” 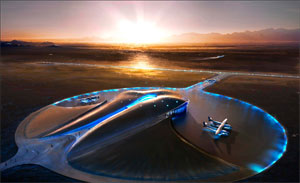 The spaceport occupies 1,800-acres of desert land approximately 45 miles north of Las Cruces, New Mexico, and is the world headquarters for the space tourism company Virgin Galactic. Construction has moved quickly since the ground breaking ceremony on June 19, 2009. According to Wilson, the first phase of construction “is made up of the spaceport’s large runway, which is completed, the terminal hangar facility that Virgin Galactic will use, the internal roads, fencing, electrical system, water/sewer systems and the dome-looking Space Operations Center.” Phase II will include “the final build-out of the Vertical Launch Complex facility, the visitor/welcome centers in the neighboring towns of Truth or Consequences and Hatch and a visitor area on the main spaceport campus. The southern road from interstate I-25 to the spaceport is also part of Phase II construction.” According to Space.com, Phase II is scheduled to be completed in 2013, making the spaceport fully operational.

The completion of Phase I construction of the spaceport is good news for Virgin Galactic‘s plans to begin launching commercial space flights in 2013.

Spaceport America, Virgin Galactic, and other commercial space companies are leading the charge to make space flights a more attainable reality for civilians, and that reality is only a couple of years away.