A picture of a UFO was taken yesterday by a photographer in Melrose, Scotland. 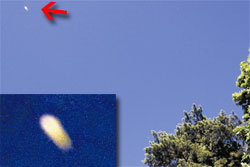 A picture of a UFO was taken yesterday by a photographer in Melrose, Scotland. The photographer, who asked to remain anonymous, supplied the UFO photo to the Border Telegraph. He described the object in the picture as “moving pretty fast at around 45 degrees towards the sky – as you can see by the close up it appears to have a tail showing the direction.” The Border Telegraph contacted both the Met Office (the UK’s national weather service) and the Ministry of Defence (MOD) to see if either group could shed any light on the UFO in question. The Met Office had no record of a weather balloon in the area, and the MOD declined to comment.

Fireball UFOs certainly aren’t a new phenomenon, and they have been seen all around the world. While meteorites and other debris entering Earth’s atmosphere can account for some of the observed fireball objects, some of these UFOs reportedly display unusual behavior like directional changes, shape-shifting, and color changes.

The cameraman who photographed the fireball in Scotland doesn’t know what he saw, but he told the Border Telegraph, “It was probably nothing, but I still don’t understand what could explain something like that in the sky.”