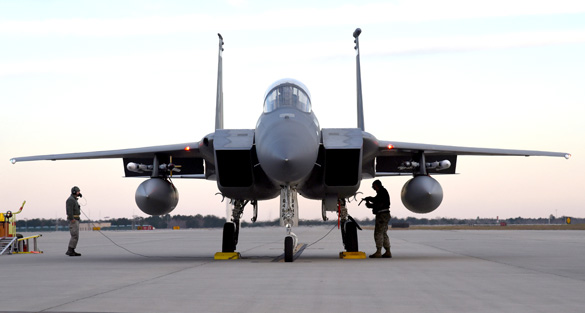 A few weeks ago a story about a UFO encounter by pilots over Arizona and New Mexico made headlines. While this encounter was impressive, the journalist who broke that story has a much more exciting case involving many more pilot witnesses and the scrambling of jets. He also was able to obtain multiple audio files, radar data and other information from the FAA regarding this unusual incident.

Tyler Rogoway is a defense writer for the website The Drive. He writes for a section called The War Zone. Rogoway often writes about advanced aircraft developed by militaries all over the world. However, in an interview on Open Minds UFO Radio, he shared that he also has an interest in the rare occasions in which a high-performance aerial vehicle cannot be identified. In other words, UFO cases.

“I’ll tell you, anyone that is in the aerospace world and journalism and tell you that they have no interest in the legacy of UFOs and the whole history that goes along with it is lying to you,” Rogoway recently told Open Minds UFO Radio. “It is an interesting thing, even for the sake of lore and intrigue. So I have followed it very closely.”

Rogoway explained that when people see things in the sky, they cannot identify, it might not be a craft from outer-space, it may be something the government is working on they are keeping secret. This makes it essential for him to keep an eye on the UFO phenomenon. He says he has never seen anything he could not explain himself. He has also been to many of the bases that are alleged to have alien bodies or crashed alien spacecraft, and he has never seen anything out of place.

However, because of the recent revelations that the Department of Defense (DoD) has had a project that takes UFOs seriously, he has felt more emboldened to write about unusual cases he has come across. It should be noted; however, his first story on the Oregon incident was posted on November 15, 2017, a month before the shocking DoD revelations. 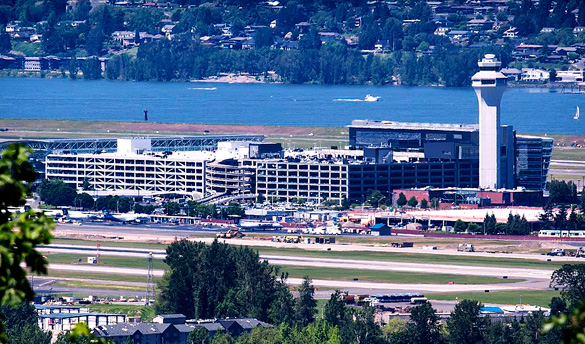 The sighting over California and Oregon took place on October 25, 2017. According to his first article on the incident, Rogoway first found out about the sighting from “friends in the aviation world.”

He says at first he felt it was most likely a case of a misidentification, which he says happens every day. Then he found an interesting post on Reddit that seemed to be referring to the sighting.

Reddit user Duprass wrote: ”Just landed in Seattle coming from the bay area. Beginning over Southern Oregon we kept overhearing Seattle Center attempting to track an airplane with no transponder who wasn’t talking. A handful of crews were able to track it visually…”

Duprass also mentioned that he heard Seattle Center, an FAA air traffic control center, was having trouble tracking the object on radar. This was when they asked pilots to see if they could get a visual sighting of the object. Among other details, Duprass also said he heard jets were scrambled.

Rogoway then found audio files at LiveATC.com that seemed to be related to the incident. Although Rogoway provides links to the audio in his story, the links no longer work. He says air traffic control and the pilots discussed the object for about half an hour.

Rogoway quickly sent a request for information to “the 142nd Fighter Wing based at Portland International Airport, North American Aerospace Defense Command (NORAD), and the FAA.”

NORAD’s reply was quick and clear. An incident involving multiple airline crews, air traffic control, and F-15Cs from the 142nd Fighter Wing based out of Portland did occur. According to the limited information NORAD supplied, airliner pilots were asked by FAA air traffic controllers to help track and possibly identify a “white aircraft” traveling in the flightlevels nearby—roughly between 35,000 and 40,000 feet based on the radio recordings. NORAD also said that the incident did result in F-15s from Portland being scrambled to investigate, but by the time they got up and ‘looked around’ the mystery aircraft couldn’t be found.

This answer intrigued Rogoway even more. He says the 142nd Fighter Wing’s F-15Cs are upgraded with some of the best radar and long-range targeting systems in the world. He writes, “The fact that they ‘didn’t find anything’ is surprising to say the least.” 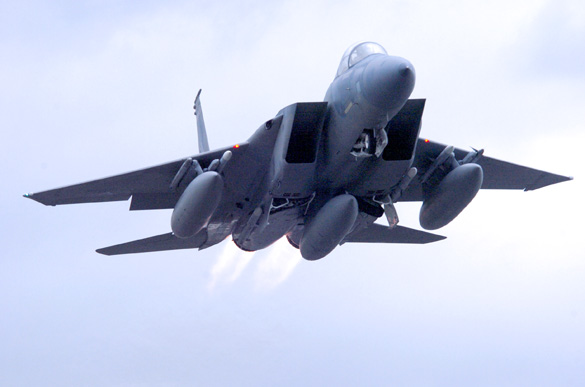 Rogoway says the FAA confirmed the event occurred, but said they had nothing further to add to what he already knew. The 142nd Fighter Wing did not respond at all.

Rogoway found another Reddit post from someone who claimed to be an air traffic controller. Reddit user The Flying Beard claimed that the situation was being investigated. The Flying Beard wrote: “I think the FAA is pursuing this at higher levels. From a safety standpoint, if the military is running super secret test stuff in the NAS [National Airspace], that’s bad. If I were one of the pilots that had a sighting, I’d definitely be filing a NASA form and any other official reports that you can…”

Rogoway’s initial article on this story added a lot more detail and some intelligent analysis. He also said he submitted a Freedom of Information Request (FOIA) to the FAA for more information.

On February 15, 2017, Rogoway posted a follow-up story regarding his investigation of this incident. He writes, “Now, through the Freedom of Information Act, we present what could be one of the most insightful instances of official documentation surrounding such an encounter that had already been confirmed to have occurred by both the FAA and the USAF. These materials include fascinating audio recordings of radio transmissions and phone calls made as the incident was unfolding, as well as pilot interviews, and conversations between FAA officials made in the aftermath of the highly peculiar incident.”

Rogoway and The War Zone put together videos with the audio synced with the radar information they received. The first video covers the initial spotting of the object. It was first seen over Northern California traveling “very fast at 37,000” feet at about 4:30 pm PST. The object then took a turn to the north where it came into the vicinity of nearby air traffic. The craft had no transponder, never communicated with air traffic control, and somehow could disappear from radar.

Soon after being first caught on radar, it dropped off of the radar. That is when nearby aircraft were asked to get a visual. Over the next half hour, and hundreds of miles, several airline crews, shared their visual sightings.

Rogoway writes, “The exchanges between nearby pilots and air traffic control regarding the unidentified aircraft were constant in the audio, with the same description coming back time and again—that of a white aircraft cruising at around 37,000 feet that is too far away to tell the type or if it has markings of any kind on it.”

Jets were scrambled about 30 minutes into the incident. However, Rogoway notes that the jets headed south from the last known location of the unidentified craft. According to the pilot reports, the object headed north.

Besides air traffic control audio, Rogoway was also able to obtain phone calls made by the FAA regarding the incident. Names are bleeped out for privacy, and Rogoway notes that there is no way to know if any of the audio has been redacted.

Rogoway also explains some of the terms heard in the audio. “DEN” is an acronym for the Domestic Events Network, which he explains is a hotline for the FAA to reach federal authorities. The term “WADS” and “Bigfoot” are also used. WADS is an acronym for Western Air Defense, which is a part of NORAD that monitors airspace over a large part of the U.S and Canada. Bigfoot is their nickname. 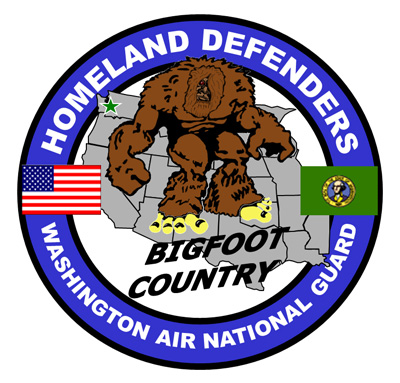 In the phone calls, FAA managers can be heard discussing how to handle the situation. They contemplate having civilian aircraft scheduled to land in Portland stay airborne so they can keep an eye on the unidentified aircraft. They decide against this because they say they are not sure “if [the unidentified object] are equipped with anything.” Presumably meaning they are not sure if they would be putting the civilian craft in danger. They conclude there is something out there and that military involvement was the best idea. There is also some debate over procedure as to who should have contacted the military and requested the scrambling of the jets.

The calls also include deliberation over how to report the incident. One controller says, “I have a feeling someone is going to go through this with a fine-tooth comb.”

The audio files also included interviews with pilots. The most interesting, Rogoway writes, is an account from a Southwest pilot.

The call with the pilot of Southwest 4712 was by far the most interesting. He immediately notes how strange the encounter was and how he has never seen an incident like it in nearly 30 years of flying jets. The pilot noted, “if it was like a Lear (private jet) type airframe I probably would not have seen it this clear. This was a white airplane, and it was big. And it was moving at a clip too because we were keeping pace with it, it was probably moving faster than we were… It was a larger aircraft yeah.” He also said they watched the object from Northern California all the way to their descent into Portland.

The final FAA calls confirmed the incident occurred, and just how “weird” the event was. Rogoway points out that the conversations demonstrate just how rare these sorts of events are. One FAA official says the event was “a weird enough thing that there is not a set procedure… It’s not often we hear about an unknown guy up at that altitude.”

The entire incident is fascinating, and the amount of material Rogoway obtained is incredible. Rogoway says he was also surprised how much information he received. In his Open Minds UFO Radio interview, Rogoway says it has crossed his mind that the FAA was more forthcoming after the news of the DoD UFO program. He certainly felt they seemed more willing to share recently than they were in November when he first broke the story. However, he does not know for sure if the DoD news has anything to do with it.

In the end, the FAA never found out what the unidentified aircraft was. They concluded it was large and fast. They state that it seemed to be flying faster than a nearby 737. 737s have a cruising speed of just over 500 mph. It had no transponder and somehow seemed to be able to evade radar. Although it dropped off the radar, it could still be seen visually. Another important mystery is why the F-15s could not find the aircraft after the commercial airlines visually tracking the object landed in Portland. Rogoway says he believes the high-tech equipment on those F-15s should have been able to find it.

Read more about the entire investigation on The Drive’s The War Zone here.