Extraterrestrial life could be on the moons of Mars

The moons of Mars could provide evidence of life on the red planet. That’s according to Purdue University professor Dr. Jay Melosh. 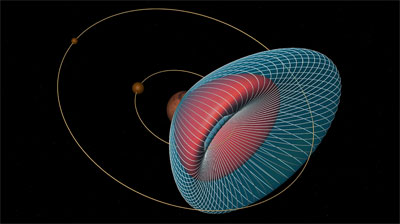 The orbits of Martian moons and the spread of potential particle trajectories from an asteroid impact on Mars. (Credit: Purdue University/Loic Chappaz)

A press release published on June 28 details Melosh’s theory that “a mission to a Martian moon could return with alien life.” He explains that, if life ever existed on Mars, or even if it exists today, the moons of Mars would almost certainly contain Martian material delivered by debris from large asteroid impacts. And as io9.com explains, of the two Martian moons, Phobos is especially likely to contain these Martian particles.

Melosh led a team chosen by NASA’s Planetary Protection Office to determine if samples from Phobos contain enough recent material from Mars to include “viable Martian organisms.” Team member Loic Chappaz expounded, “It is estimated that during the past 10 million years there have been at least four large impact events powerful enough to launch material into space, and we focused on several large craters as possible points of origin. It turns out that no matter where Phobos is in its orbit, it would have captured material from these powerful impact events.”

The researchers concluded that:

Special attention is paid to time frames, because, as team member Professor Kathleen Howell explains, “It is thought that after 10 million years of exposure to the high levels of radiation on Phobos, any biologically active material would be destroyed.” Howell added, “Even if we found no evidence of life in a sample from Phobos, it would not be a definitive answer to the question of whether or not there was life on Mars. There still may have been life that existed too long ago for us to detect it.”

As NASA reformulates its Mars Exploration Program, a future mission to Phobos is a possibility.

The team’s findings were presented at a joint NASA-European Space Agency meeting in Austria.