...governments who are members of the EU have to open their classified archives and release all documents relating to UFOs.

European Union Parliamentarian calls for an end to UFO secrecy

An Italian Member of the European Parliament in Strasbourg, France, has submitted a request to the highest legislative body within the European Union for full disclosure of classified UFO documents by the 27 nation governments that belong to the EU. The written declaration presented on June 14th was sponsored by Mario Borghezio, leader of the Italian Northern League party, a controversial politician due to his extreme right-wing positions. From a political standpoint, the core of the declaration (code # 0057/2010) is to create a “European commission on UFOs,” but actually the basis of the request is that the 27 governments who are members of the EU (UK, France, Germany, Italy, Spain, Poland, etc.) have to open their classified archives and release all documents relating to UFOs. The title of the document submitted by Borghezio is: “Written Declaration pursuant to Rule 123 of the Rules of Procedure on the declassification of documentation on UFOs.” This is the full text of the declaration:

A. whereas in 1978 the 33rd General Assembly of the United Nations formally recognised UFOs as a valid issue,

B. whereas in 1993 a resolution drafted by the Italian physicist Tullio Regge and seeking to extend to European level the investigative remit of what was then the only government body looking into UFOs (the SEPRA, which has now become the GEIPAN) was tabled in Parliament,

C. whereas many members of the scientific community have been looking into the issue of UFOs and have denounced the systematic covering-up of information on the subject,

D. whereas a study of the material collected by the governments of all the Member States would have major scientific and technological spinoffs,

1.  Considers it essential to set up a scientific centre for the analysis and dissemination of the scientific data gathered to date by various European bodies and governments;

2.  Calls for public archives on UFOs to be opened up and for records to be declassified by the Member States, thus providing the public and the mass media with access to the full range of documentation on the subject;

3.  Instructs its President to forward this declaration, together with the names of the signatories, to the Council, the Commission and the governments of the Member States. 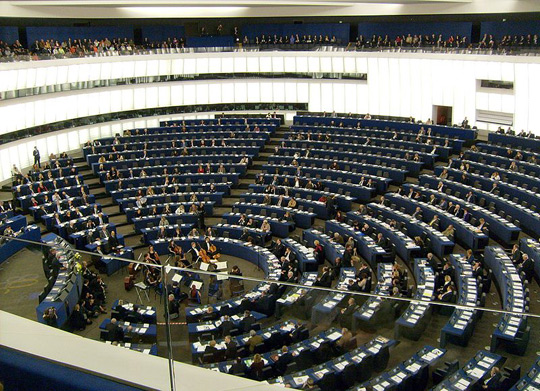 This is not the first time that the UFO subject has been officially discussed by the European Parliament, although similar initiatives in the past were eventually defeated. In early 1990, in view of the massive UFO wave then taking place in Belgium, the Belgian European deputy Elio Di Rupo (a Socialist, son of Italian immigrants) proposed a motion to set up a “European UFO Observation Center” under the Committee on Energy, Research and Technology (CERT). Despite Di Rupo’s political relevance– he is one of Belgium’s most respected politicians–his initiative failed. However, the matter was eventually revived by another Eurodeputy, Prof. Tullio Regge, an Italian member of the European Parliament with a Ph.D. in physics, who released a “Draft Report” on August 17, 1993.

The Regge report, as it came to be known, was a fairly long document that discussed a number of interesting issues, including “Military secrets; Alien civilizations; Supertechnologies,”; etc. Regge sought the advice of Jean-Jacques Velasco, who was then the head of SEPRA (the French Space Agency UFO department who has since been renamed GEIPAN) and basically recommended that SEPRA be expanded to include all members of the European Community. Unfortunately, the European Parliament did not have the necessary votes to implement and fund Prof. Regge’s recommendations, and so the matter was dropped until Mario Borghezio’s recent “Written Declaration.” 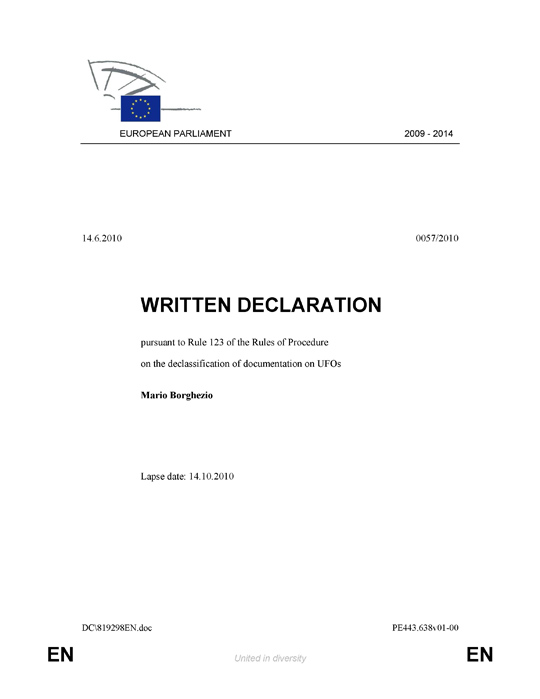 Borghezio's written declaration on the declassification of documentation on UFOs page 1. 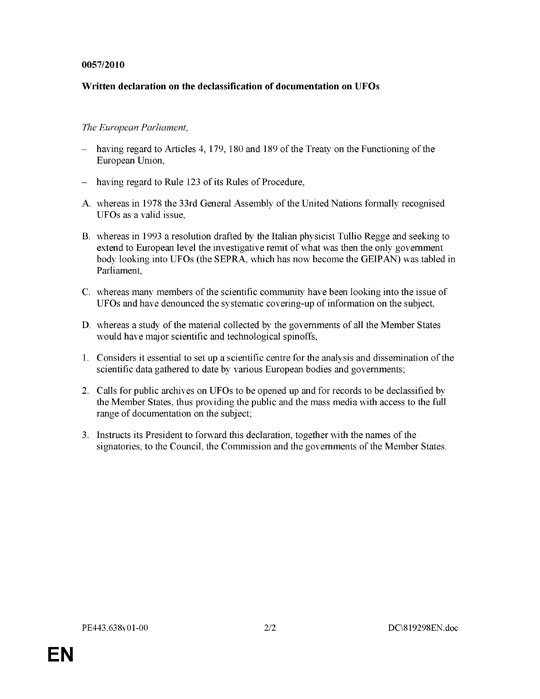 Borghezio's written declaration on the declassification of documentation on UFOs page 2.

Click here to go the official webpage of the European Parliament to download the document in PDF format.