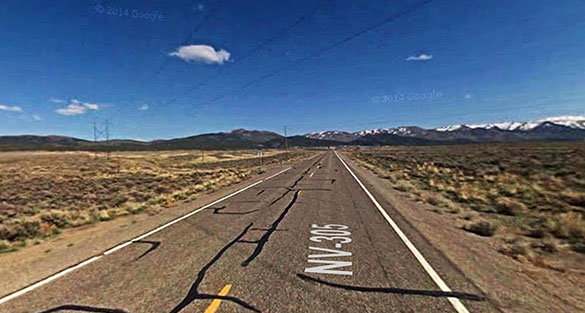 A Nevada witness near Austin reported a close encounter with a low flying and hovering triangle-shaped object about 300 feet long moving overhead under 500 feet, according to testimony in Case 82126 from the Mutual UFO Network (MUFON) witness reporting database. 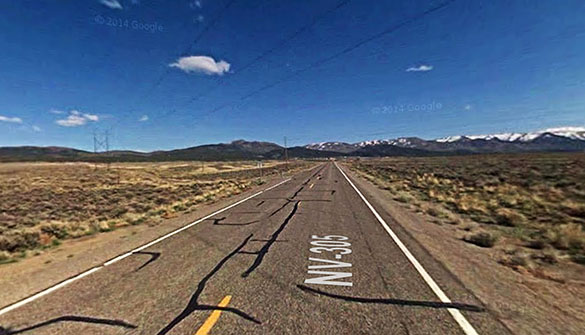 The witness first saw a bright light ahead about 1,000 yards that appeared to be hovering. Pictured: Near Austin, NV. (Credit: Google)

The reporting witness is a communications engineer who was leaving work at a remote radio site on Mount Callahan on February 15, 2017.

“We were driving down from Mount Callahan at 8p.m.” the witness stated. “We entered a clearing and saw a bright light in the sky just out in front of us about 1,000 yards. It was just sitting there about 30 degrees up in the air.”

The witness stopped his truck and got out to watch the object.

“In an instant, it became a very large triangle with two lights in each corner. The object appeared to rotate slowly for about a minute. The body blotted out the stars. Then it suddenly became a massive rectangle with about 30 lights around the parameter. It did not move or make any sound for about a minute.” 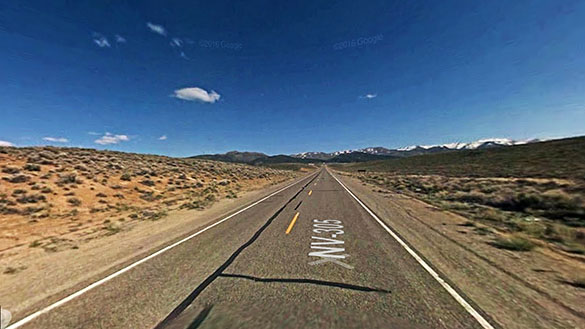 The object suddenly appeared to be larger and it began to rotate. Pictured: Near Austin, NV. (Credit: Google)

The object then suddenly disappeared.

“Then it just was gone as if turning off a light. About five seconds later we could hear a very loud rushing air sound just above us, but we could not see anything above us, just stars. The sound got louder, then slowly as if flying away, got softer and softer until silence. This lasted about 20 seconds. This was an extremely remote commutations site, Our trucks were the only lights for 20 square miles. I felt that it had been watching us and then just appeared directly in front of us, did its little show and left.”

“Two other black triangle cases were reported in the last month in Nevada,” Countiss stated in her report.“First one is Case # 80764 in Carson City. Second is Case #82130 in North Las Vegas near the Air Force base flight zones. There is another from November 2016, Case # 80486 near Laughlin.” 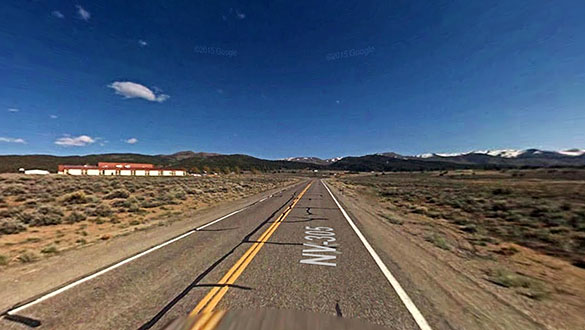 The object then disappeared as if a light switch had been thrown. Pictured: Near Austin, NV. (Credit: Google)

No photos or videos were included with the MUFON report, which was filed on February 16, 2017. Please remember that most UFO sightings can be explained as something natural or man-made. The above quotes were edited for clarity. Please report UFO activity to MUFON.com.