Home / Articles / Egg-shaped UFO photographed in Caseta, Italy
They have ruled out the possibility of the object being an insect, bird, natural phenomena or conventional aircraft, and find the egg-shape and metallic silver color particularly interesting. 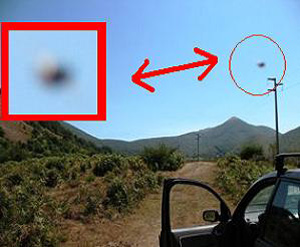 Salvatore Caldrarone of the Central Ufologico Di Benevento (CUBMG) in Italy sent us this UFO image today. Although the picture dates back to 2007, CUBMG staff manager, Angelo Carannante, was just sent the picture by its photographer, Buompane Salvatore. Carannante forwarded the picture to their image analyst, Carmine Silvestri, who believes it to be a genuine unknown. They have ruled out the possibility of the object being an insect, bird, natural phenomena or conventional aircraft, and find the egg-shape and metallic silver color particularly interesting.

The picture was taken in August 20, 2007 in San Gregorio Matese in the province of Caserta. Salvatore did not see the object when he took the picture, but only noticed it after he reviewed the image later. CUBMG says the Matese area “proves to be a fertile area for sightings.”

The story has been covered on the Italian news site Notzie Fresche.