The Rendlesham forest incident is considered one of the best multiple witness UFO sightings in history, and if you purchase a new audio version of one of the first and most popular books on the event, you will be helping to fund a new UFO movie. 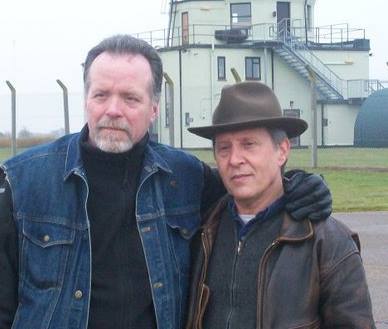 The Rendlesham forest incident took place in the UK in late December of 1980 in a forest area between the Royal Air Force Base’s of Woodbridge and Bentwater. At the time both were being leased by the US Air Force. Dozens of witnesses reported UFO sightings, including the deputy base commander. One of the more controversial versions of the event comes from Larry Warren, an airman stationed at Woodbridge at the time. His account includes an actual meeting between extraterrestrials and US military personnel.

Warren’s account was documented in a book co-written by UFO researcher Peter Robbins. Robbins had been researching the abduction phenomenon for many years, and was the executive assistant to Budd Hopkins’ Intruder Foundation. Hopkins was a pioneer in the field of abduction.

Robbins says their book, Left at East Gate: A First-Hand Account of the Bentwaters-Woodbridge UFO Incident, Its Cover-Up, and Investigation, has recently been used to create a capsulized audio version called “Britain’s Most Famous UFO Encounter,” and the proceeds are going to help fund a new UFO movie which he is Associate Producer of.

“For the past two years now, I am Associate Producer of an independent film entitled Apollo Minus Project. It should come as no surprise to many that the film’s subject revolves around the decades long controversy surrounding UFOs and their implications. AMP’s protagonist is a young filmmaker driven to obsession in his quest to get to the heart of this matter, during which he encounters and interviews some of the leading researchers, investigators and authors in the field – a number of whom play themselves in cameo performances, including yours truly. Apollo Minus Project blends found-footage guerrilla filmmaking, old 16MM, and NASA archival footage in a provocative story surrounding one of the greatest mysteries out there: What is really on the dark side of the moon?

In the service of seeing this film become an absolute reality, I have recorded “Britain’s Most Famous UFO Encounter.” The album is available on iTunes for $1.99 for the entire set of four consecutive chapters. BluMINUS MEDIA’s first offering is based on the actual encounter documented in the British bestseller, Left of East Gate: A First-Hand Account of the Rendlesham Forest UFO Incident, Its Cover-up and Investigation which I co-wrote with eyewitness Larry Warren. This is the first available audio recording. 100% of the proceedings are going toward the making of the film Apollo Minus Project. This is your chance to be of genuine, active assistance in a most worthy creative – and historic – endeavor. So lend a hand and help us to spread the word. You can order the album by going to this link: https://itunes.apple.com/us/artist/bluminus-media/id626378209.”