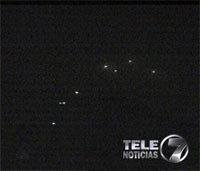 Approximately twenty UFOs were seen in the sky above Moravia, Costa Rica on Saturday, August 27. The mysterious lights were witnessed by physicians, agents of the Organismo de Investigación Judicial (Costa Rica’s version of the FBI), and other professionals who were at a party. The witnesses initially thought the lights were from helicopters. But known aircraft was ruled out by the airport control tower at the Tobias Bolaños in Pavas.

Witnesses claim the UFOs were visible for five to ten minutes, moving from east to west through the sky.

One of the witnesses recorded the lights on video, which was later broadcast on Telenoticias, a local news station. According to InsideCostaRica.com, the video is “being subjected to analysis and field research to determine what the lights were.”

According to Telenoticias, the lights were also reported in the Costa Rican city of Limón, which is approximately twenty miles away from Moravia.