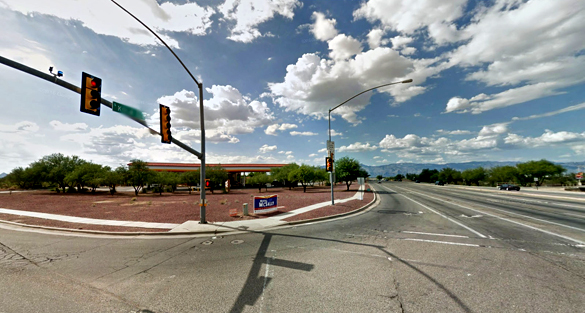 An Arizona witness at Tucson reported watching a hovering disc-shaped object just 50 feet off the ground, according to testimony in Case 80260 from the Mutual UFO Network (MUFON) witness reporting database. 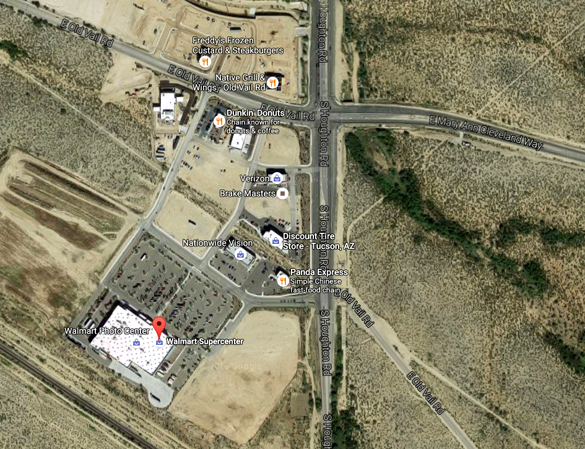 The witnesses first saw the object from the parking lot of the local Walmart. (Credit: Goolge)

A woman and her son were the witnesses at the Walmart on Houghton and Old Vail Road at 10:37 p.m. on September 26, 2016. The woman’s husband filed the report with MUFON. The man emphasized in his report that his wife and son are “devout Catholics” and very truthful people.

“Son prior to entering the vehicle just happened to glance at altitude of aircraft and noticed an object sitting there just hovering,” the reporting witness stated.“He pondered for a moment and then he told his mother what he was seeing.”

The young man’s mother also looked in this same direction.

“Wife and son then departed Walmart in direction of Valencia and Old Vail Road. They headed towards Kolb. The object suddenly appeared on the northwest side of the intersection above the gas station (cannot remember the name of the gas station). Family pointed out, they sat there at the light just in shock and amazement at this object. Also, too, nobody in the local area driving even noticed this object.”

The family turned left at the light, and soon after turning onto S. Kolb Road, they pulled over; about a block on the right-hand side gravel lot in front of an RV consignment business.

“This large object also appeared in front of them and lowered to within 40 feet of the vehicle. Jeep remained running, no electrical fluctuations in, nor other issues. The object, which was now about 40 feet in front of them (I don’t know altitude exactly), son said it was 40 – 50 feet in altitude, with strobing white lights. He said it looked like it was all in a pattern (row), but pulsating at the same time with two rows of lights – an upper and lower row, close to each other. They said it was alternating, but the lights were not together, only both rows alternating in same pattern, but not in exact same distance from each other.”

“The object then inverted itself in a 45-degree angle and it then shot to the right, which is on the right-hand side of the road, on side the RV business nestled within the treeline, heading in the direction of Pima Air and Space Museum on Wilmot Road on Valencia after disappearing below the tree line.”

The family members could not see past this business, nor the departing altitude,and assumed it had to be very low over the desert floor. 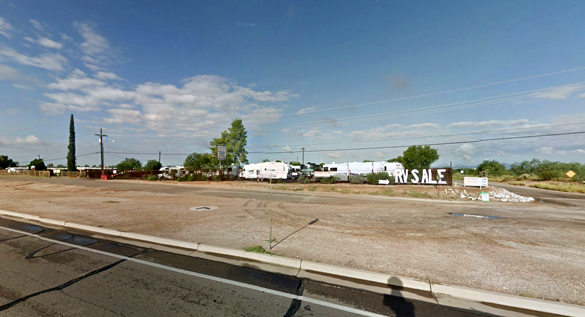 The witnesses pulled over in front of an RV business, pictured, where they saw the object about 400 feet off the ground. (Credit: Google)

“To the right side also, on site, is a ravine down to the desert, but is a minor grade. My family was sitting there dumbfounded and shocked to what the just witnessed. Upon arriving back at the house, I questioned whether anything in regards to video or photos; anything to explain what they had just experienced, only shock and awe about the whole event, just so amazing but little apprehension about the experienced. He did roll the window down, but that was as far as I know. Stated the object was approximately school bus size, only a silhouette as to what it looked like. This event was within 1.5 miles of Davis-Monthan Air Force Base. My wife stated she is willing to talk to investigators in Spanish, which is her native language. Myself, I am a retired Air Force aircraft mechanic that has been on over seven different aircraft platforms over 39 years; military, Femerald Civil Service, and now DOD contractor based in Iraq. I do know aircraft variants. Thank you.”

No images or videos were included with the MUFON report, which was filed on November 6, 2016. MUFON Arizona Field Investigators Cay Randall-May and Sonia Rivera are investigating. Please remember that most UFO sightings can be explained as something natural or man-made. The above quotes were edited for clarity. Please report UFO activity to MUFON.com.