SETI detected new unknown radio signals. Could they be from ET?

SETI (Search for Extraterrestrial Intelligence) detected an unknown radio signal, known as the “Wow!” signal, on August 15, 1977 with Ohio State University’s Big Ear radio telescope that was so unexpected and impressive that it was named after the response it’s detection elicited. And after more than 34 years of silence, SETI recently detected new unknown radio signals. But instead of a “Wow!” response this time, the new signals appear to have elicited more of a “Meh” response (“Meh” is a term popularized by the television show The Simpsons that is used to express indifference). 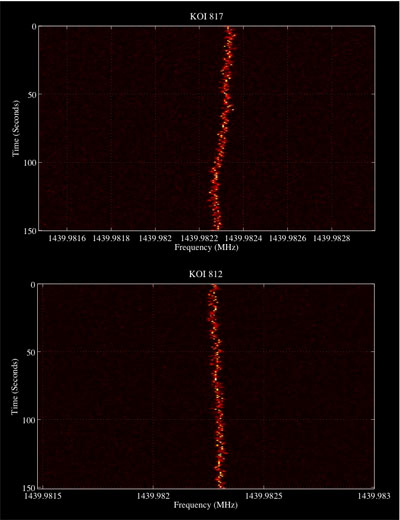 SETI scientists recently began using data obtained from NASA’s Kepler space telescope, which allows their search for alien radio signals to be more focused. Ian O’Neill from Discovery News recently explained that the first “candidate” signals resulting from this new approach were detected. These signals were announced by the Search for Extra Terrestrial Intelligence at UC Berkeley on Thursday, January 5. Their announcement stated, “We’ve started searching our Kepler SETI observations and our analyses have generated some of our first candidate signals.”

But as O’Neill explains, “Sadly, the first candidate signals aren’t lucky detections of alien radio transmissions.” The Search for Extra Terrestrial Intelligence at UC Berkeley announced that the newly detected signals are “undoubtedly examples of terrestrial radio frequency interference.” And, to make this point absolutely clear, they updated their website with the following message:

[I]t became clear that we had not stated as definitively and absolutely as possible that these signals are interference. We have updated the post to make this clear. Sorry for any confusion.

So, even though they state that these newly detected signals “look similar to what we think might be produced from an extraterrestrial technology,” the Search for Extra Terrestrial Intelligence at UC Berkeley is strongly pushing assumption as fact. The International Business Times explains more SETI assumption, stating, “When a single signal, a Kepler Object of Interest, comes from multiple positions in the sky, researchers conclude that it’s most likely due to interference.”

SETI scientists will continue analyzing data from the nearly 50 TB of data collected in early 2011, and results will reportedly be posted in the coming weeks. Perhaps a signal from ET is waiting in the data to be discovered. But I’ll assume that more assumptions will be made.