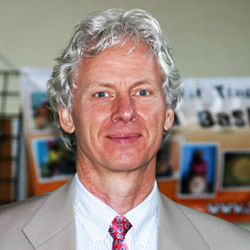 Thus far Jeff Peckman’s grass-roots efforts to make controversial changes in the city of Denver have not come to fruition, however that doesn’t keep him from trying. The man who garnered worldwide media attention with his campaign to create an extraterrestrial relations committee, says his mayoral campaign “will incinerate lame excuses that have been used at all levels of government that have lead to failing education, high crime, poor health, a polluted environment, and an underperforming economy.”

Prior to his ET committee, Peckman had successfully gotten on the ballot an initiative to create stress release programs for city officials. Although neither of his initiatives received enough votes to be enacted, for each he was able to collect thousands of signatures. He only needs three hundred signatures to get his name on the list of candidates for mayor.

Peckman is not running on an extraterrestrial platform, his website outlines 6 areas of focus: public safety, education, jobs, city budget, medical marijuana, and transparency. As one could image, he is taking a novel approach to each. For example, he feels jobs could be created by building a spaceport in Denver, such as the one being built in the desert in New Mexcio. He also believes jobs and revenue can be increased by making Denver a forerunner when it comes to clean energy development, and sustainable building technologies. 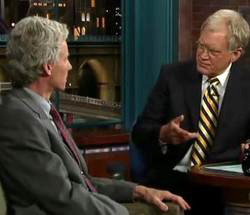 An image from Peckman's appearance on David Letterman.

Peckman doesn’t leave UFOs and extraterrestrials completely out of the equation, in his goal for government transparency, he says “I will speak out on issues like bank bailouts and the Federal Reserve, 9/11 and Building #7; GMOs, chemtrails and HAARP, and also  ‘UFOs’ and extraterrestrial visitors.”

In an article by the Denver Daily news, they asked Peckman if he thought people will take him seriously.  He answered, “They’re always going to think that (I’m a nutty guy,) but nobody has told any truth that didn’t get ridiculed or resisted in some way, and yet many of those truths prevailed and were the foundation for progress for humanity.”

With the Huffington Post already posting a story about his bid for mayor, Peckman will definitely get media attention. Whether he can turn that into a successful campaign for mayor, may depend on your measure of success. The Tea Party has demonstrated that unconventional methods and perspectives can generate a lot of unexpected support. We’ll see if Peckman can do the same.