Curiosity's landing site has been dubbed Quad 51—no relation to Area 51, according to NASA.

NASA’s latest Mars rover, Curiosity, has not begun roving the planet yet, but it is already providing scientists back on Earth with a wealth of information and awe-inspiring imagery. With data from Curiosity, and with images from the High-Resolution Imaging Science Experiment (HiRISE) camera on NASA’s Mars Reconnaissance Orbiter, scientists are mapping the Gale Crater region where Curiosity landed on August 5. And Curiosity’s landing site has been dubbed Quad 51—no relation to Area 51, according to NASA. 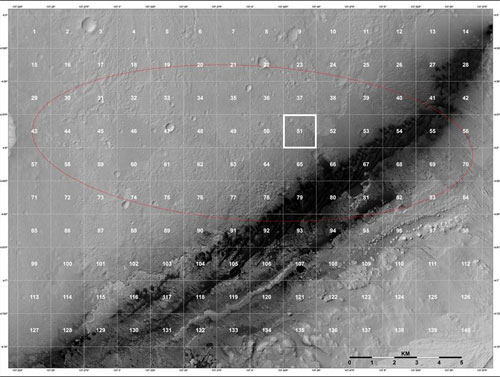 According to Florida Today, NASA has officially named the landing site Yellowknife, after the capital city of Northwest Territories, Canada, where geologists discovered Earth’s oldest rocks. A group of scientists responsible for mapping the area around the landing site “divided the area up into about one-mile by one-mile quads, or squares.” And Curiosity “happened to land in Quad 51.”

Although Florida Today speculates that “conspiracy theorists are going to go nuts when they discover NASA’s Curiosity rover landed in Area 51 inside Gale Crater,” Curiosity science chief John Grotzinger says assigning the same number to this particular quadrangle as the secretive military installation in Nevada “was completely by accident.”