Crowd stops to watch fleet of UFOs over Colombia.

A large crowd stopped to observe a fleet of UFOs in the sky above Pereira, Colombia on Friday, November 8. 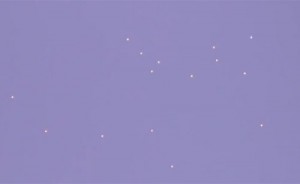 A video of the event was uploaded to YouTube with the following brief [translated] description:

UFO website TheUFOTimes.com describes, “This armada of UFO orbs . . . caught the whole city by surprise. These orbs are not often seen, but when they are it seems that the UFOs are certainly not shy and not trying to hide.”

The video shows hundreds of bright orbs lazily drifting in the evening sky over Pereira. Next, the video cuts to a shot of pedestrians stopping to view the aerial objects. This back and forth between the orbs and the crowd of onlookers is repeated several times. But there is never a continuous shot of the crowd and the orbs. There is always an edited cut in between. This detail led some to suspect that the video could be a manufactured hoax. 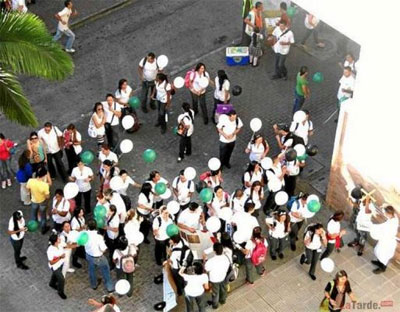 But according to Colombian newspaper La Tarde, the fleet of UFOs did in fact appear over Pereira. The newspaper clarified, however, that these orbs were not extraterrestrial.

La Tarde reports that 400 students from the Andean Region University Foundation tied potatoes to balloons on November 8 as a symbolic act to protest against healthcare reform. La Tarde addressed the confusion caused by the video showing the alleged mass UFO sighting in Pereira by simply stating, “[I]t is clear that the objects seen in the sky were the ‘potato bombs.'”