Home / Articles / UFO News / Cowboys & Aliens: Another one bites the dust
Cowboys and Aliens, based off the graphic novel by the same name, attempts to seamlessly blend together old western charm with modern sci-fi gore.

Cowboys & Aliens: Another one bites the dust 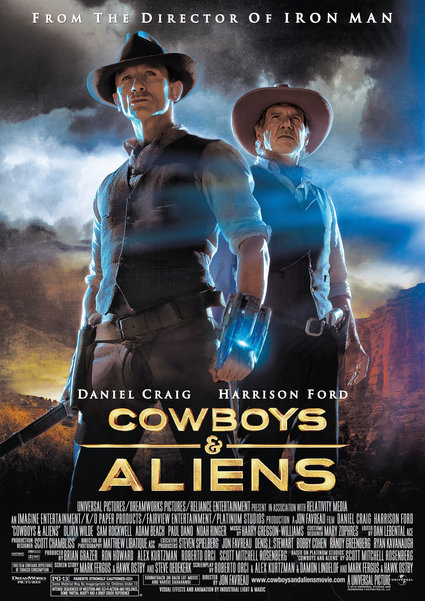 Cowboys and Aliens, based off the graphic novel by the same name, attempts to seamlessly blend together old western charm with modern sci-fi gore. While there is some tongue-in-cheek humor of the western variety, director Favreau makes an attempt at keeping this adventure a serious one, unfortunately for him, that’s what makes this film bland.

With a stellar cast, accomplished writers, producers, an outstanding director and an interesting concept, this film held all the ingredients for a tasty summer treat. Executive producer Steven Spielberg’s flair can be seen as an influential backbone throughout the film. Fans will find references to the Indiana Jones series, bits and pieces from Star Wars and assorted generic westerns. So the question is, with all the right cooks in the kitchen why are we getting second-rate fare?

We find ourselves in 1873 in the desert just outside the struggling town of Absolution. Daniel Craig plays Jake Lonergan, a man of few words who wakes up with a large gash near his stomach and a thick metal cuff around his wrist and no memory of…well, anything.

Soon he finds himself with a bounty on his head, an over-bearing cattle baron out for revenge (Harrison Ford), and a spoiled brat whining in his ear (Paul Dano). Not to mention the beautiful woman who just won’t leave him alone. Olivia Wilde stars as Ella, a mysterious woman whom turns out to be more than just screen eye candy.

Their squabbles come to an abrupt halt when flying objects swoop overhead desecrating their little town and plucking up its citizens. Thus an unlikely unification of the Wild West occurs, bonding the cowboys, outlaws and Indians against the “demons” – slimy, bug-eyed monsters from outer-space.

In what one can only assume to be a peyote fueled revelation, Craig takes us to the second act of the film, where all the mystery is suddenly blown out of the desert – a turn that flat lines the suspense. In Battle: LA they came for our water and now they’re coming for our gold. A concept which writers stated was based loosely on the Annunaki deities of Babylonian history. But why are they abducting the human beings and what exactly are they doing to them? They don’t really ever say.

Craig exudes the strong silent type and blends effortlessly into his role, perhaps because he rarely speaks. Ford pulls off the cranky Woodrow Dolarhyde but just barely…the real notable performances come from supporting roles by Adam Beach, Sam Rockwell and Clancy Brown whose characters were a bit more down to earth and whose dialogue was actually thought-out.

Where the film really suffers is the lack of character development. There isn’t enough to make you care if the cowboys triumph or if their loved ones meet a gruesome end by the disturbing three-fingered hands of their opponents. In fact, indifference is the perfect word to describe this movie.

The lack of resolution to much of the storyline leads one to wonder…is Favreau banking on a series? I’m not even sure that Craig and Ford can hold up their rustic physiques that long.

Redeeming qualities? It’s not a sequel and it’s not in 3D.