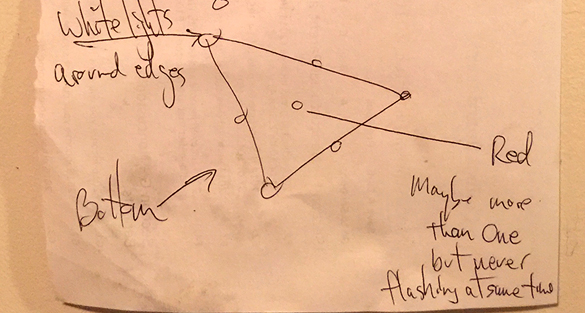 An Ohio witness at Cleveland reported a close encounter with a triangle-shaped UFO, according to testimony in Case 75119 from the Mutual UFO Network (MUFON) witness reporting database.

The event occurred beginning about 10:21 p.m. on March 8, 2016, with the object heading south, and the witness soon dictated details into a telephone as he is a lifelong visual artist.

“At first I saw it coming,” the witness stated.“It was traveling slowly. It was not that high up in the air and it was an unusual constellation of lights so a grab my iPhone and I thought I should take a picture of whatever it is. And then it got closer and I got closer. We were converging right over Interstate 90.” 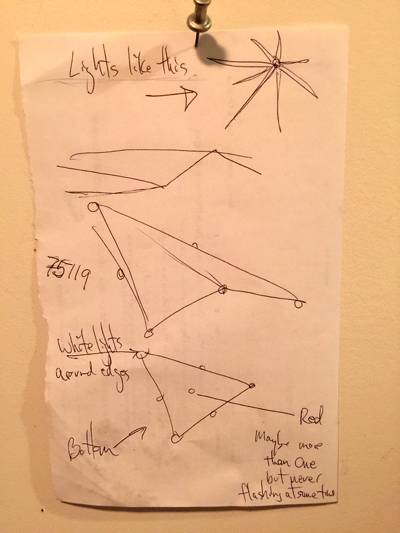 The witness first thought the object was something that could be identified.

“As it got closer and closer I thought it might be a group of helicopters. But they were in too tight of a cluster. I saw a constellation of lights that were in an abstract sort of triangular form. As the craft got closer, I kept looking up and I saw that there was a slightly lighter color to the body than the dark sky.”

The witness described the lighting on the objects.

“There were lights on all three corners and in between the corners with a dazzling white very, very white, bright, bright light. On the bottom there was a flashing red light. At least one. Maybe they were alternating from different positions on the bottom.”

The craft was traveling very slow and low to the ground.

“The craft was traveling very slowly. It was probably four to six telephone poles off of the ground. Not regular telephone poles, but the kind of tall ones that are along the interstate. If this craft was indeed triangular, it appeared to be traveling backwards away from the point.”

There was an aspect of this triangular pattern that was hard for the witness to comprehend.

“The lights seemed to be pointing toward me, not so much at me, but so bright that it looked like they were pointed at me, although it was not pointed at me at all. That’s how dazzling the lights were.”

As the object moved overhead, the witness thought there was structure to the object.

“As the craft approached the highway before it crossed over me, I thought it could be a structure, a linear structure like I-beams or something that have lights along it and it was not a flat triangle. It appeared to have a flat aspect, but the front seemed to be folded a little making it like two long, skinny triangles, but only in the front.” 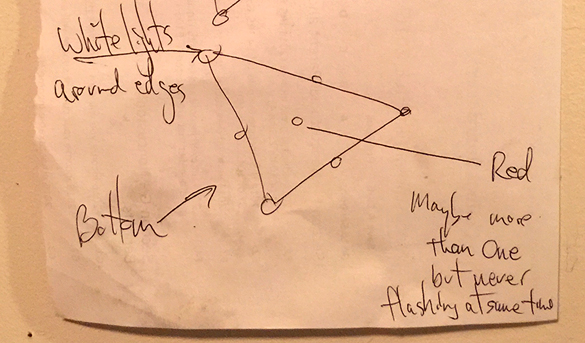 The witness was not afraid.

“I did not feel any unusual feelings outside of disbelief. I racked my mind trying to figure out what it could be other than a craft. It was not that high off the ground. As an artist my life profession is about looking and seeing. I’m very articulate and I’m able to describe things well. I worked as a carpenter for 30 years and I have a pretty good sense of dimension. I would guess this craft was between 40 and 60 feet long. Of course perspective could have thrown all of this off. Of course everything about this could be incorrect. But if it was what it appeared to be, I saw something quite remarkable and would like to know if anybody else saw the same damn thing.”

The witness provided an exact location for the sighting.

“It was west of exit 169 on Interstate 90 – that was what I dictated (with only punctuation changes). I am most curious if there were other reports of this thing. It had to have been seen by many others because it was so low and moved so slowly and was over a very, very populated area – along the edge of Cleveland. And lastly, and strangely enough, I have been struggling to photograph my drawings and for some reason they will not photograph. I have never had a problem with taking photos on my phone. Very strange. And I am not even suggesting that they are related at all.

Ohio MUFON Field Investigator Joseph Pavlansky closed this case as an Unknown. Please remember that most UFO sightings can be explained as something natural or man-made. The above quotes were edited for clarity. Please report UFO activity to MUFON.com.