At a recent special event held by the National Atomic Testing Museum in Las Vegas, Nevada, a panel of former and current CIA employees answered questions about Area 51 and the discussion included  talk about UFOs. However, their answers left some, including local media, doubting. 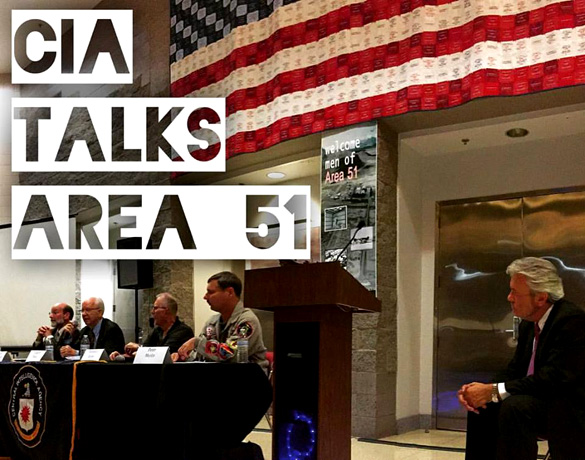 The National Atomic Testing Museum is home to an Area 51 exhibit called Area 51: Myth or Reality. It was opened in March, 2012, back when Area 51 was still officially a secret. The exhibit includes information about UFOs.

The museum plans on closing the exhibit at the end of the year, so they have been hosting Area 51 and UFO talks – including yours truly – over the last few weeks.

The panel was moderated by KLAS investigative journalist, George Knapp, who posted a story on the event on the KLAS website. He said the CIA panelists “had their tongues in their cheeks when talking about Nevada’s rock star of military bases: Area 51.”

In the video posted on KLAS of the event (seen above), Poteat says, “What happens at that secret base called Area 51 is known by everybody, there’s nothing secret.”

In his story, Knapp does not sound convinced. In fact, in the video Knapp can be heard prompting the group about the fact that secrets can be kept from the public.

Robarge jokingly replied, “I can neither confirm nor deny that secrets can be kept.”

However, Barnes was willing to agree with Knap and admit that secrets could be kept. He said he could not even tell his wife where he worked when he was at Area 51.

Filmmaker Jeremy Corbell, who is working on a documentary about alleged Area 51 whistle-blower Bob Lazar, asked the panel if the CIA was still researching UFOs. Robarge said they were not.

Robarge also brought up a report written a few years ago in which the CIA claimed that many UFO sightings in the 1950s and 1960s were caused by spy planes flying out of Area 51.

He said, the study “found a 75 percent correlation between black projects and UFO sightings.”

Knapp asked Dr. Bruce Maccabee, a retired optical physicist for the U.S. Navy and author of the book The FBI CIA UFO Connection, what he thought about that claim.

Maccabee, who actually conducted research to verify the claim, says that UFO sightings did not increase when the U-2 began its flights. In fact, Knapp points out, in his book, Maccabee had written that “UFO sightings were much higher in the years before the U-2 or SR-71 were even built.”

Another document that made this claim was The Central Intelligence Agency and Overhead Reconnaissance: The U-2 and Oxcart Programs. This was the document that was further redacted in 2013, finally making the existence of Area 51 official. However, as we pointed out in a previous story, the UFO claims were inaccurate.

In his story, Knapp points out, “CIA employees and contractors who toiled in secrecy at Area 51 helped win the Cold War. They did so, in part, by using disinformation and cover stories, even with their own families. It is an agency known for relying on subterfuge and misdirection, but not a lot of truth.”

The KLAS I-Team asked Robarge if the CIA encouraged the belief that their spy planes were UFOs. He replied that they would not have been allowed to do that, but he added that they did nothing to discourage such beliefs either.