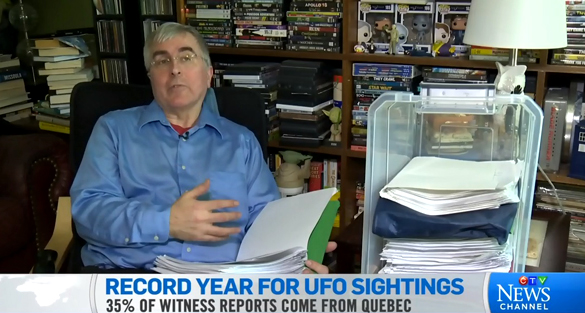 Open Minds UFO Radio: Canadian, as well as U.S., news has been ablaze with stories about the 2015 Canadian UFO Report released by UFO researchers in Canada. Chris Rutkowski has been inundated with interviews about the 1267 sightings reported last year, and we have him on Open Minds UFO Radio this week to talk about those sightings.

Chris is a Canadian science writer and educator with degrees in astronomy and education. Since the mid-1970s, he’s also been studying reports of UFOs and writing about his investigations and research. He has eight published books on UFOs and related issues, including Unnatural History (1993), Abductions and Aliens (1999), A World of UFOs (2008), I Saw It Too! (2009) and The Big Book of UFOs (2010). He has appeared on numerous radio programs, podcasts and documentary TV series, including Unsolved Mysteries, UFO Hunters, Sightings, Eye2thesky, The Paracast, Discovery’s Close Encountersand A&E’s The Unexplained. He is past president of both the Winnipeg Science Fiction Society and the Winnipeg Centre of the Royal Astronomical Society of Canada.

For more about the 2015 Canadian UFO Sightings, visit: http://survey.canadianuforeport.com/

Get a copy of Chris’ presentation on UFO sightings in Canada at the 2016 UFO Congress here.