Home / Articles / Ancient Chinese UFO records Pt I
...many fascinating accounts of flying machines, unexplained celestial observations and close encounters with strange beings can be found quite extensively in historical and literary works from China. 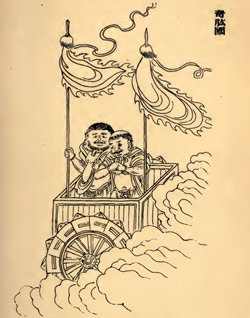 It shouldn’t come as a surprise that many fascinating accounts of flying machines, unexplained celestial observations and close encounters with strange beings can be found quite extensively in historical and literary works from China. Many national and overseas Chinese researchers have pursued this topic, including Paul Dong, Shi Bo, Kai-Chi Chang and Ke Yang, among others.

One of the first to explore this field was the German-American scholar Berthold Laufer (1874-1934), long-time Curator of Anthropology at the Field Museum of Natural History in Chicago. Laufer discussed “the romance of flying in ancient China” in his classic monograph The Prehistory of Aviation, published in 1928, long before the modern UFO era. “The Chinese emperor Shun, who lived in the third millennium before our era (traditional date 2258-2208 B.C.),” wrote Laufer, “is not only the first flyer recorded in history, but also the very first who made a successful descent in a parachute, an experiment first made or repeated in the midst of our civilization as late as A.D. 1783.”

Laufer cited various ancient Chinese chronicles describing a ‘fei ch’o,’ a flying chariot, a term—he adds—still used presently in China “for the designation of an aeroplane.” [See Picture #1.] Some stories seem more legendary or mythological, but others seem to imply that a real flying contraption existed during the reign of certain emperors. Although the method of propulsion remains obscure, Laufer is inclined toward an “aerostatic principle,” noting that the Chinese were also the inventors of the flying-kite; therefore the chariot was probably some kind of “kite chariot.” 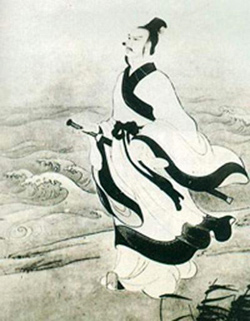 The statesman and poet Qu Yuan, author of the poem Li Sao, where an aerial journey is described. (Image Credit: Wikimedia Commons)

Laufer mentions the famous poem Li Sao (”Fallen into Sorrow”) by K’ü Yüan (modern spelling Qu Yuan, c. 332-295), who was an important statesman and poet in the southern Kingdom of Chu during the so-called Warring States Period. His name is associated to the Duanwu or Dragon Boat Festival, which is held on the anniversary of his death every year. Qu Yuan fell in disgrace due to palace intrigues and so, wrote Laufer, “he found solace in composing a poem, which is an allegorical picture of his search after a prince who would listen to good counsels in government. The poet kneels at the grave of the emperor Shun, and is then carried up into the air in a chariot built in the form of a phoenix to which are yoked four dragons smooth as jade. In this vehicle, through dust and wind, he suddenly ascends on high toward the K’un-lun range of mountains.” Here are some excepts from Li Sao dealing with the poet’s aerial journey:

“I ordered the phoenix to fly aloft,

And continue its flight day and night

I turned my course to K’un-lun;

Long was the way, and far and wide did I wander,

Amidst the dark shade were displayed the rainbows in the clouds,

While the jade bells about the chariot tinkled.

I started in the morning from the Ford of the Sky,

And in the evening I arrived at the extreme west.”

Stone Bas-relief of Aerial Contest of Dragon-Chariot and Dragon-Riders, Han Period, AD 147 (Image Credit: B. Laufer, The Prehistory of Aviation)

How much of Qu Yuan’s poem is a factual and how much poetical allegory is anybody’s guess. A chariot shaped like a phoenix powered by four dragons is probably not the most believable evidence, but luckily there are many other accounts which seem more precise and matter-of-fact. In exploring historical Chinese records one has to distinguish at least four categories: 1) descriptions of then unknown natural phenomena of atmospheric and astronomical kinds; 2) records of ancient, man-made flying contraptions; 3) purely mythical or literary creations; 4) possible genuine UFO observations.

Taiwan researcher Kai-Chi Chang published in 1991 the book, From The Record – UFO Sightings in the Ancient Chinese History Books, which catalogued 741 UFO incidents recorded in China between 139 BC and 1918 AD. Some cases are just a note on a log like this one from the year 32 BC during the first year of the Han dynasty: “Two moons appeared in the night sky all of a sudden.” Other observations, however, are far more detailed like this case from April 13, 905 AD during the Tan dynasty:

“In the middle of the night, a very large star that looked like a dou (a 10-liter box-like grain measuring container) suddenly appeared in the top of the sky and was floating toward the northwest. When it had reached about 30 meters above the ground, it suddenly stopped and remained still. The top of the star appeared to be burning, and red and yellow blazing flames were as high as 5 meters tall. Later the star started to serpentine. Wherever had it passed, little stars on its sides were moving toward the southeast, and they came down like raindrops that soon disappeared. Meanwhile, pale mist rose from the earth like bamboo thickets toward the center of the sky.” (The Astronomy Record II, The Book of New Tang, Year 2, Tang dynasty.) Kai-Chi Chang added that “this could not be a meteor, because meteors cannot pause when plummeting from the sky; in addition, a meteor cannot change direction or serpentine. It had to be a UFO.” 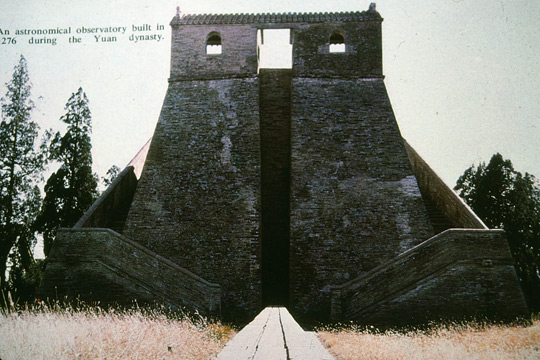 Some descriptions seem almost modern in their tone like, for instance, the observation of an “Occurrence at Dawn” by the 13th century medieval poet and scholar Liu Yin (or Liu Ying, 1279-1293). The event took place near the city of Baoding, Hebei province, on the early morning of June 3, 1277, when China was ruled by the Mongol Yuan Dynasty. Liu Yin is described in The Encyclopedia of Confucianism as “one of the important Confucian thinkers in the North during the early years of the Yuan dynasty.” Another book, Heritage of China, edited by Paul S. Ropp, provides the following interesting biographical sketch:

“The hermit-scholar Liu Yin (1249-1293), on the other hand, allegedly refused Khubilai’s [Kublai Khan, the Mongol Emperor mentioned in Marco Polo’s Travels] summons in order to maintain the dignity of the Confucian Way. To him, education was for self-realization. Loyal to the Chin culture in which he was reared and faithful to the Confucian Way that he had learned from the Sung masters, Liu Yin rigorously applied philological methods to classical studies and strongly advocated the importance of history. However, true to Chu His’s spirit, he took seriously the idea of the investigation of things and put a great deal of emphasis on the learning of the mind.”

A 1330 edition of the book by Liu Yin, Essential to the Collected Meaning of The Four Books. (Image Credit: National Palace Museum, Taiwan)

We see this emphasis on investigation in the way he described the UFO observed in 1277 and attempted to find what it was. Here is the text of Liu Yin’s poem “Occurrence at Dawn” as transcribed in the French book la Chine et les extra-terrestres (China and Extraterrestrials) by the Chinese ufologist Shi Bo, now residing in France:

“Rising at dawn, I saw through the window a brilliant light crossing the Milky Way. I then saw three glowing objects appearing in the southern part of the sky, two of which flew away disappearing rapidly from my view. What remained had five unequal lights underneath, while on its upper part I noticed something shaped like a dome. The unknown object began to move in zigzag in a similar fashion to a falling leaf. At the same time, something in flames fell from the sky. Shortly afterwards, the Sun rose but its luminosity was tarnished by the luminous object which moved rapidly in a northern direction. In the western part of the sky, a green cloud was suddenly agitated by another unknown object, which was oval in shape, flat, and was descending quickly. This object had a length of over nine feet and was surrounded by raging flames; it ascended and then descended. In view of this splendid and emotional spectacle, I ran towards the village to alert its dwellers. As my friends walked out of their houses, the flying contraption disappeared.” 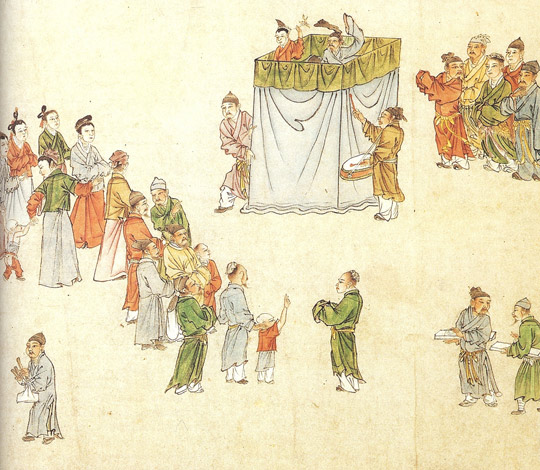 After describing the object, Liu Yin devotes a final few words to attempt understanding what it could have been. He wrote that, “after the event I reflected a great deal, but I was unable to find a reasonable explanation. I had the impression of leaving a long dream. I immediately wrote down everything I saw, so that those who can understand these events can give me an explanation.” 700 years later, all kinds of experts have studied what we now designate as UFOs, yet no one has been able so far to find “a reasonable explanation” that can convince everybody.

In Part Two, we’ll explore some fascinating close encounters registered during the Ming dynasty in the 16th and 17th centuries. Berthold Laufer’s book, The Prehistory of Aviation, can be downloaded from the Internet Archives here. 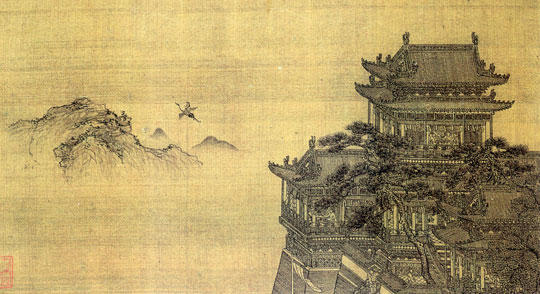