there are a record number of UFO scientific and community-based organizations in China. 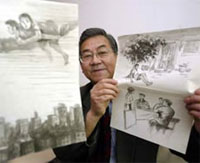 The Canadian reports that Chinese scientists believe aliens currently walk among humans. One of these alleged believers is Sun Shili, a retired foreign ministry official and current president of the Beijing UFO Research Society. The newspaper also mentions Shen Shituan, a rocket scientist, president of Beijing Aerospace University and honorary director of the China UFO Research Association, who says, “All these phenomena are worth researching.”

Izvestia, a daily Russian newspaper, reports that there are a record number of UFO scientific and community-based organizations in China. The actions of these organizations are reportedly protected by the National Society of the Extraterrestrial Studies, which is financed by the Chinese government. According to The Canadian, “Only professional scientists and engineers are allowed [to be]members in the Society. A person [is]also required to have [a]Ph.D. in science and have several published works about UFOs. About a third of all members of the society are also members of the Government of China.”

This is yet another example of a government acknowledging the reality of the UFO phenomenon.