Home / Articles / UFO News / Centreville blue UFO: IDENTIFIED
The mysterious blue UFO that appeared above Centreville, Virginia in early November has been identified, according to Fox 5 in Washington, DC. 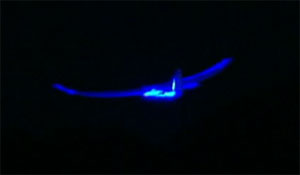 The mysterious blue UFO that appeared above Centreville, Virginia in early November has been identified, according to Fox 5 in Washington, DC.

The strange blue light was back in the sky above Centreville on Monday night. After the first sighting earlier in November, Fox 5 received emails from across the country, but their attention was drawn to one particular email that said, “I have information on the blue UFO lights.” A Fox 5 news team met the sender of the email in a dark Centreville field, where he revealed to them his remote controlled glider plane, adorned with blue LED lights.

After being shown a video of the glider in flight by Fox 5, the witness who videotaped the blue light back in early November is “almost positive” that what he saw was the illuminated glider.