Home / Articles / Cattle Mutilation returns to the San Luis Valley
Manuel Sanchez, a rancher outside of the town of San Luis, Colorado suffered the loss of four calves due to mysterious mutilations in 2009, and this month he has lost another. 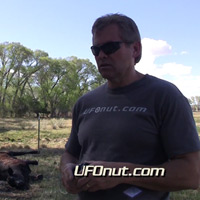 Manuel Sanchez, a rancher outside of the town of San Luis, Colorado suffered the loss of four calves due to mysterious mutilations in 2009, and this month he has lost another.

The string of mutilations in 2009 began with a fury in March with two animals on three different ranches in and around the San Luis Valley dying of mysterious causes. Authorities, including the local branding inspector, and ranchers could not determine how the animals were killed. In each case there were no signs of a struggle, nor a speck of blood nearby, indicators of a predator kill. The deaths didn’t end in March; by the end of 2009 eight animals were killed, four of those belonging to Sanchez.

Upset with the authorities’ inability to explain what happened to his animals, and feeling helpless to stop the killings, Sanchez sold off his remaining calves in 2009. His animals have been safe up until this month, when on May 17 he found one of his missing adult female cows apparently mutilated similarly to the calves in 2009.

The 2009 wave was investigated by Chuck Zukowski, micro-chip engineer and paranormal investigator out of Colorado Springs. Sanchez informed Zukowski of this new animal and invited him out to take a look. When they got to the animal, they found it had been burnt. A nearby rancher that also uses the land where the animal was found burnt the animal. It is a standard practice in the area to keep dogs and other animals from picking at it and possibly spreading disease. Although the animal was burnt, this was mostly just on the outside of the carcass. It luckily had not been incinerated. 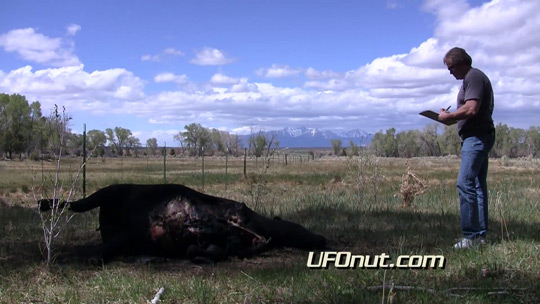 Upon inspection, as with the earlier cases, there were no signs of a struggle, nor splattering of blood, so it didn’t look like a predator had killed it. They also noted that the animal’s tracks leading to the area looked normal, the animal’s pace was not abnormal and did not indicate that it was having problems walking. It appeared that the cow just fell over, with no indication as to why or how it died. There was also a missing area of hide under the animal, exposing the rib cage. Zukowski measured the missing hide to be 27 by 42 inches.

Because the animal had been burnt, any tissue samples would not have been helpful. However, Zukowski did measure for abnormal EMF, and also scanned it with a magnetic wand, but the readings were not unusual.

Zukowski and Miller were left with no answers. In the past Zukowski has worked with a veterinary professor out of Colorado State University, and although they are willing to perform a necropsy and examine samples, the animal needs to be found within a couple of days of its death. That is obviously difficult, as is transporting an animal, and of course the burning of the carcass further hampers analysis.

Cattle mutilations often happen in small waves, as was demonstrated in 2009, so it is possible another one may occur in the area soon. Hopefully, the rancher affected seeks help and is able to get in touch with Zukowski, until then he will be ready and waiting.

You can read more about this case at UFONut.com, and in the video below.