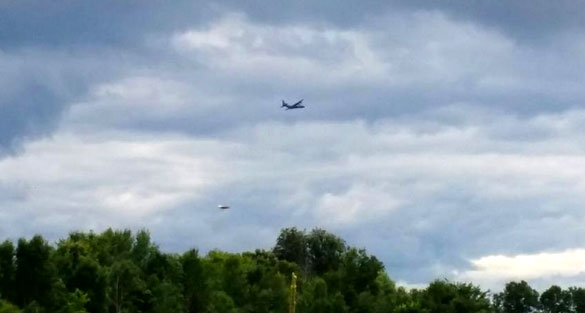 A Canadian witness at Ontario reported videotaping a low flying military airplane making unusual moves in a report where a still image taken at the same time shows a disc-shaped object near the plane, according to testimony in Case 58504 from the Mutual UFO Network (MUFON) witness reporting database. 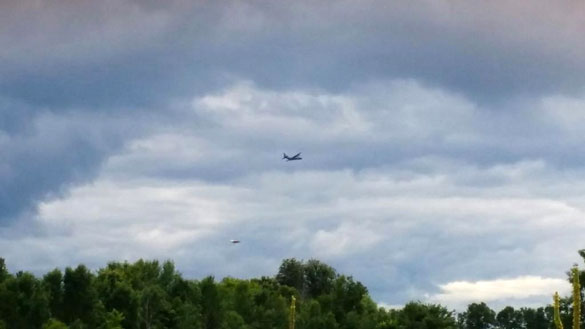 One of the witnesses snapped this still image which shows the military plane and a disc-shaped object. (Credit: MUFON) 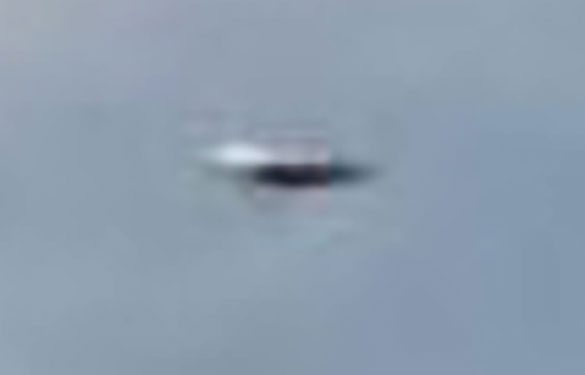 Cropped and enlarged portion of the witness image showing only the disc-shaped object. (Credit: MUFON)

“No description of the object was provided except a video and a still photo,” Mitchell wrote in his report.“The video was too small for this Field Investigator to see any object but the military plane. Upon speaking with the witness, it was learned that the video was simply provided to show the strange maneuvers of the plane. The object wasn’t visible in the video. Then there was a silver, disc-shaped object visible in the photograph. In our interview, the witness said the object didn’t make any sound and didn’t appear to have any wings, lights or propulsion. It was a massive, chrome-reflective ‘giant flying saucer’ that was the size of two, four-store houses. According to the witness, the military aircraft was the size of a city block, a massive plane. He believes the object was about half the size of the military plane. The object also appeared to be flying sporadically. The witness said the friend that thought he had seen the object with his naked eye described it as ‘fired out of the sky like nothing else’ until it disappeared. The witness and his friends believe the strange craft was also reflecting light because it was very hard to see with the naked eye. They believe the photograph just happened to capture it under the right light conditions.”