A recent study concluded that 2011 was a near-record year for UFO sighting reports in Canada. 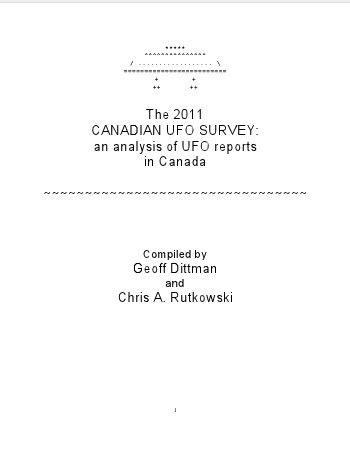 A recent study concluded that 2011 was a near-record year for UFO sighting reports in Canada. The Winnipeg-based group Ufology Research tracks UFO sighting reports in Canada, and data published in their 2011 Canadian UFO Survey shows that there were 986 sightings reported during 2011. This number is just shy of the record 1,004 reports set in 2008.

The Daily Mail explains that “the majority of sightings were simply street lights or aircraft,” but the study concluded that “many people continue to report unusual objects in the sky, and some of these objects do not have obvious explanations.” In fact, the study found that approximately eleven percent of the 986 reported sightings from 2011 are unexplained.

According to the report, “Many witnesses are pilots, police and other individuals with reasonably good observing capabilities and good judgement.”

The study suggests several possible explanations for the increase in the number of UFO sightings:

More UFOs are present and physically observable by witnesses; more secret or classified military exercises and overflights are occurring over populated areas; more people are unaware of the nature of conventional or natural objects in the sky; more people are taking
the time to observe their surroundings; more people are able to report their sightings with easier access to the Internet and portable technology; or even that the downturn in the economy is
leading to an increased desire by some people to look skyward for assistance.

The group behind the study concludes that the rise in the number of UFO sighting reports “suggests a need for further examination of the phenomenon by social, medical and/or physical scientists.”

Ufology Research, formerly known as Ufology Research of Manitoba, has collected and analyzed Canadian UFO data for twenty-three years, and does so “to provide data for use by researchers trying to understand this controversial phenomenon.” The group’s UFO data from 1989 to the present is available at http://survey.canadianuforeport.com