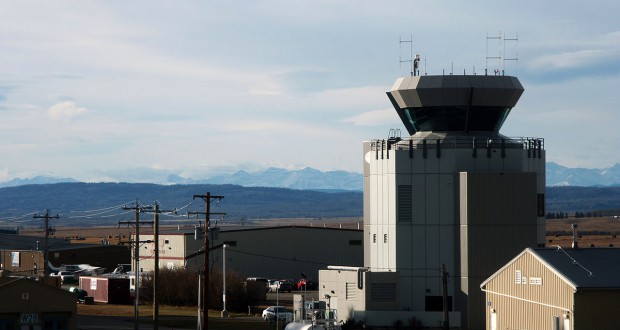 The pilot was approaching the airport about mid morning on December 17, 2014, when the object was first noticed.

“Approaching from the north, I was approximately 10 miles north of Cochrane flying parallel to and a couple miles west of Highway 22 and descending through 8,500-feet above sea level or about 4,500 -feet above the ground,” the witness stated. “It was a bright, sunny morning and I was just looking at the scenery when I spotted a black object along the highway, maybe two miles ahead of me that was moving fast northbound, towards me.”

The pilot first thought the object was a fast car and decided to time it to see how fast it was moving.

“After looking at it for a few seconds, I thought I would time it along the section lines on the ground and calculate a speed of this very fast car. Within a few seconds I realized that what I thought was going to be a Corvette, in fact, was a flat black colored, tubular object that was flying low level over the highway. It was cigar-shaped and not flying with the end of the cigar pointing forward but perpendicular with the long edge in the direction of flight.”

The pilot was actually getting closer to the object.

“As I was flying south at some 230 knots and the object was coming towards me, the whole encounter happened fast, but fortunately I was getting closer and could get a better look at the craft.”

The pilot got a good look at the object.

“As I came above the object, it was wider than the road and difficult to estimate the height, but probably within a couple hundred feet of the ground.” 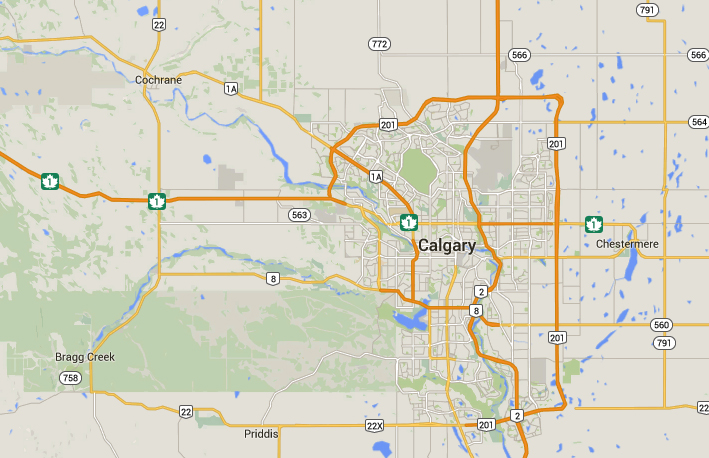 The pilot was approaching Calgary and was approximately 10 miles north of Cochrane flying parallel to and a couple miles west of Highway 22 when the cigar-shaped object was seen under 200 feet off of the ground. (Credit: Google)

The pilot was then surprised to see the object disappear.

“Then maybe stranger than actually seeing this object, as it was nearest my position directly off my left wingtip, it vanished within one-half a second. It quickly turned translucent where I could see a blurred image of the field and road through it while it had a darker edge along the outline of the craft. The object very quickly appeared clearer and within a fraction of a second it disappeared from view.”

The pilot scanned the ground area trying to locate the object again.

“I had no idea what I had seen and scanned the area around the track the object was flying, thinking maybe it was the top of a wing of a pipeline patrol aircraft that I had seen, and that maybe the aircraft banked and I lost sight of it. Scanning the area it never reappeared.”

The pilot then used instrumentation to locate other aircraft in his area.

“I looked at the TCAS (traffic collision avoidance system) display in the cockpit that shows all the aircraft that are being interrogated by ATC radar in the area. And although there were many other aircraft to the south and west, there was nothing on the display near me.”

The pilot attempted to judge the size of the object.

“Looking back towards where I last saw the object, I noticed cars on the road heading south and this helped judge the size and speed of the object compared to a ‘known ground based object.’ The cars were both much smaller and slower than the object and were within a mile of it when it disappeared. The drivers may have seen the same phenomena. I estimate the object as between 50 -80 feet in length and 15-20 feet wide.” 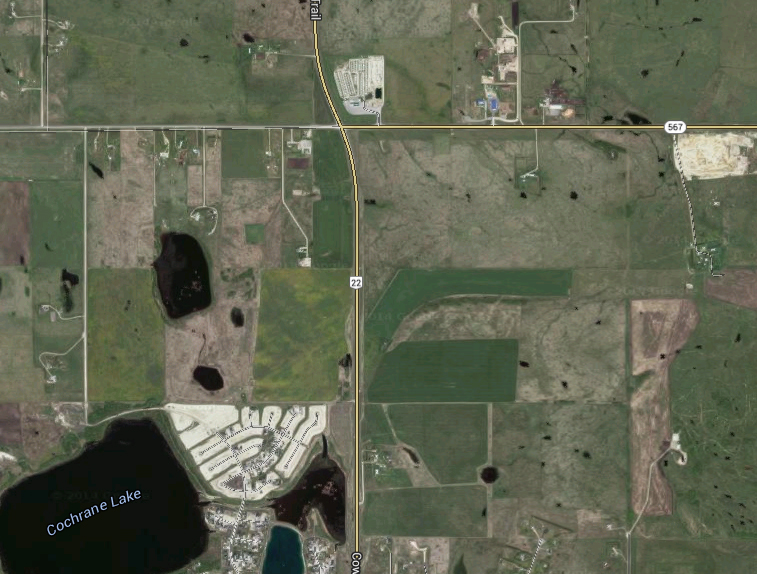 The pilot was just a few miles west of Route 22, pictured, north of Cochrane when the object was spotted moving close to ground level. (Credit: Google)

The pilot also tried to estimate the object’s speed.

“It moved on a steady track and at a constant speed. I mentally timed it at crossing a half-mile in under 12 seconds or around 160 mph, a speed not particularly fast for a small airplane, but faster than what patrol aircraft use when flying low level.”

He described the object.

“There were no discernible markings, windows, lights, or other features. Just a flat black, rectangular cigar-shaped object. The entire encounter was at the most 30 seconds long as the closing speed on the object was in the neighborhood of 400 mph.”

There were no other witnesses aboard the pilot’s aircraft.

“There were several passengers on the aircraft, but they were concentrating on a conversation in the aircraft. I doubt anyone saw the object and I didn’t ask as I enjoy my job. Likewise, as the object never showed on my TCAS, there wasn’t much point in asking ATC if they noticed anything. Besides it had disappeared at that point.”

The pilot compared the sighting to other experiences.

“On a side note, as a pilot with 30 years of experience, I have seen sights and objects which I could always dismiss as meteors, cloud formations, atmospheric phenomena such as inversions, other aircraft, satellites, etc. Even if this object had kept its track, I may have been passed off as some type of UAV, however, as I witnessed from a relatively close range the disappearance of the object, I have no doubt it was something that is either cutting edge top secret military tech or something that I have no explanation of.”