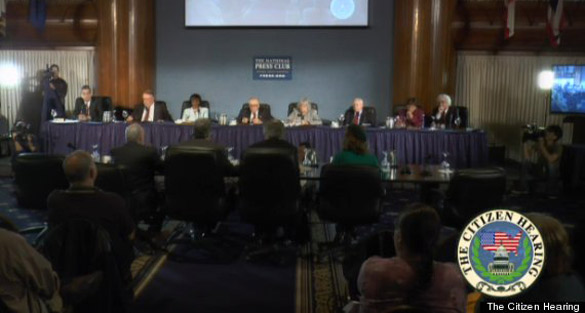 The man who brought us the Citizen Hearing on Disclosure has now begun phase 2 of his campaign to get the President to admit that the government is aware of an extraterrestrial presence on earth.

Stephen Bassett was the organizer for the Citizen Hearing on Disclosure. He brought dozens of presenters to testify in front of a committee of former members of the US Congress “about events and evidence indicating an extraterrestrial presence engaging the human race.” The event was held April 29 to May 3, 2013 at the National Press Club in Washington D.C.

His event garnered a lot of media attention. As usual, a lot of it was tongue in cheek and made fun of his efforts, but some of it was less critical. Either way, the event was praised by the UFO activists. He was even awarded the researcher of the year award at the International UFO Congress.

Now, over a year after the mock-congressional hearings, Bassett is moving forward with the second phase of his effort. This phase is called the Citizen Hearing Initiative.

On his website, Bassett says on November 5 he sent 538 copies of a 10 disc DVD set that includes all of the testimony from the Citizen Hearing to every member of the United States Congress. He then asked supporters of his cause to engage members of the congress via social media requesting them to view the videos and hold congressional hearings on “extraterrestrial related phenomena.”

He says, ” This will be a concentrated three-month effort accompanied by substantial media coverage.  If congressional hearings are held, it is quite likely the truth embargo will collapse.”

Thus far there has not been a lot of media attention, although The Washington Times did post a short write-up yesterday.

Bassett is also hoping to leverage the power of the tweet and hashtags. He is hoping that supporters will help create a “Tweet-Email Storm” by tweeting and emailing members of the house and the senate. He asks that tweeters send messages using the hashtag #Disclosure.

If you would like to help Bassett “make it rain,” you can find more information on his website.

Aliens are certainly a hot topic in Washington D.C. right now. However, congress is having a hard enough time deciding what to do about the terrestrial type. Will a twitter storm be enough for them to put those concerns aside and tackle aliens of an extraterrestrial nature? It might be a task that even tweetin’ can’t accomplish.