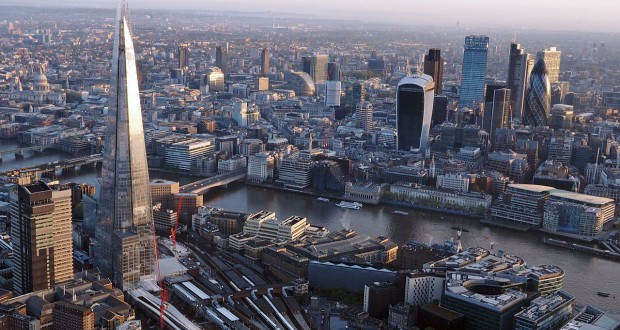 A British witness at London reported following a strange light hovering about 150 feet in the sky and discovered a group of five objects, according to testimony in Case 64007 from the Mutual UFO Network (MUFON) witness reporting database.

“I was about to cross the road to go home to my flat when first I looked up in the sky in this same direction I always look in,” the witness stated.

The witness has seen unusual objects in the same area and saw a “strange light” that appeared to be hovering.

The Palace of Westminster at night as seen from the opposite side of the River Thames. (Credit: Wikimedia Commons)

“It was not moving. It looked pure red with a reddish glow and was round and about 6 feet wide and 6 feet tall. I stayed still looking at it to see if it was just a star not moving or the movement of the clouds eluding me.”

After watching the object for about 20 seconds, the witness said the object began to move.

“It suddenly started moving at about 10 miles per hour and I was standing still trying to make out if it was a plane or one of these UFOs I have seen in the past. It was not high up at all – maybe about 150 feet.”

Then the witness saw a “circle ball of light” move across the road next to the building he lives in and decided to follow it.

“During the whole experience there was no sound emitted. So I was walking to try and get underneath it while it was still stationary. As I was walking, I got on the phone to my girlfriend and I got under some trees and could faintly see it.”

The witness moved out from under the tree and noticed more of the objects.

“I looked up and I see approximately five of the same balls of light in a complete small circle. I stood and looked up in shock and after about three seconds, they literally just vanished from the sky as if they had a switch to turn the lights off.”

The witness stayed in the area another 10 minutes, but did not see the objects again.

London is the capital and most populous city of England and the United Kingdom, population 8,416,535.