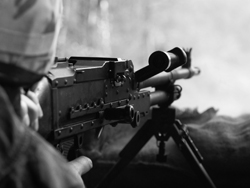 A British paratrooper, who is also an Open Minds radio listener serving in Afghanistan, sent me these sightings that he and his fellow soldiers have had.

21st/May/09
0245 hrs
Private reports seeing a cigar-(shaped) object about 20 to 40 km from our position. The distance was recorded with laser range finder. Object was being observed with thermal imaging devise, also with night vision under thermal it was white hot, but no exhaust was seen. Under night vision, the object was emitting lasers on the ground like search lights then there was a flash of lightning across the sky. Object was gone also under the normal spectrum. Underneath the object’s hull was very colorful. The whole incident lasted about 25 min.

25th/March/08
0300 hrs
I was on pred (Predator) watch looking at a target with the predator drones when the pred was called back to Khandhar. Me and a mate were in the ops room, staff with was a couple of Canadian officers female. It was about 0300 local and we were all chattin’ about end of tour which was soon, when we noticed an object was seen on pred about 30 km from preds position. It was a white ball of light which seemed to be tailing the pred but doing some fancy maneuvering. We confirmed there was no craft in the area. A few phone calls were made. About 20 mins later an American air force officer burst in and told everyone who was not U.S. air force to get out of the ops room. Now we have Special forces clearance which is quite high, they even told us to get out. Next time we were on pred in that ops room all the staff had been replaced. When we asked about some of the officers we were told they had finished their tour, when we knew they had 4 months left? Weird.