A strange light appeared over New Mexico and Arizona, and the "weather balloon" explanation has been offered to identify it. 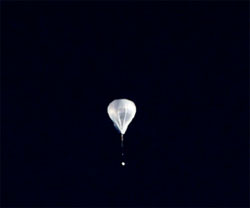 The object in the sky above New Mexico (credit: KOAT/SweetsPhotoSuite)

KOAT channel 7, the ABC affiliate in Albuquerque, New Mexico said that calls poured into their newsroom on Saturday evening from witnesses reporting a strange light in the sky. A similar light was spotted in the sky above Phoenix, Arizona early Sunday morning.

A routine weather balloon was initially offered by meteorologists as an explanation for the light in the sky. But the National Weather Service in Phoenix issued a statement Sunday morning to offer another explanation — a NASA-affiliated research balloon. The statement announced, “After further research we received confirmation from the Columbia Scientific Balloon Facility that a launch did occur from Fort Sumner, New Mexico last night and was brought down over Arizona this morning.”

The National Weather Service statement offered the “research balloon” theory, but concluded “This may explain the sightings,” not offering a 100% conclusive identification for the strange light that appeared over New Mexico and Arizona. But pictures of the light do strongly resemble a research balloon, so that is most likely what it was.

This video from KPNX channel 12, the NBC affiliate in Phoenix, shows the flight path of the research balloon: