Scientists claim to have discovered the oxygen molecule for the first time ever in deep space. 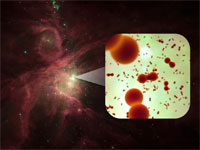 Scientists claim to have discovered the oxygen molecule for the first time ever in deep space.

Small signatures of molecular oxygen were detected in the star-forming complex of the constellation Orion by the Herschel Telescope. The Huffington Post points out that oxygen is the third most abundant element in the universe (following hydrogen and helium), but until now, the molecular form of oxygen has never been found outside of Earth. Similarly, in their recent press release, NASA stated, “Individual atoms of oxygen are common in space, particularly around massive stars. But molecular oxygen, which makes up about 20 percent of the air we breathe, has eluded astronomers until now.”

The detection of molecular oxygen in space lends support to the notion that life as we know it could exist elsewhere in the universe.

The details of the Herschel Telescope find will be published in the Astrophysical Journal.