The movie Battle: Los Angeles is scheduled to be released later this year, but marketing for the film is well underway. Several teaser-trailers have been released, and an informational website detailing information about the aliens in the movie was recently launched. 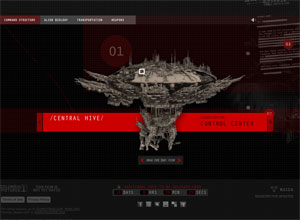 UnidentifiedEnemy.com contains data about the biology of the alien creatures that will be seen in the film, as well as details about their various technologies.