Robbie Williams is a British pop star who has made headlines regarding his interest in UFOs. One of his UFO trips on a plane often used by Snoop Dog was recounted by an author who focuses on fringe topics in a recent interview. 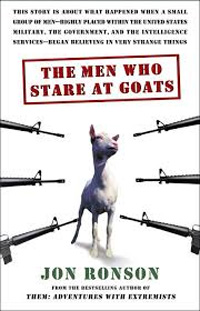 Jon Ronson is best known for his non-fiction book The Men Who Stare at Goats, which recounts U.S. Army programs that explored paranormal and metaphysical topics. The book was made into a movie starring George Clooney and Ewan McGregor. The title for the book comes from experiments in psychic abilities in which a soldier would attempt to kill a goat using simply the power of the mind.

Apparently Williams read Ronsons’ book Them. This book was about people with extreme beliefs, mostly conspiracy related. This included David Icke, who believes the world is controlled by reptilian aliens. Williams liked the book so much that he wanted to invite Ronson on his next paranormal adventure.

Ronson told Alan Davies in an interview on his new show As Yet Untitled that he got a call from a friend telling him “stay by your phone Robbie Williams is going to phone.” Ronson did not know Williams personally and apparently felt a little overwhelmed, he said, ” I thought that is much too stressful so I turned off the phone, and I went for dinner.”

Williams left a voicemail saying he had read Them, and invited Ronson to join him on an overnight stay at a haunted hotel. Ronson said he agreed and attempted to arrange a visit to a lady’s home where she says ghostly activity takes place when a certain portrait in her drawing room is moved.

Ronson says Williams then called and changed his mind. Instead, he wanted to go UFO hunting and visit some alleged alien abductees in Nevada. Williams had a hired a pane for the day. Ronson agreed.

When they got to the plane there was a woman standing outside. Ronson recalled the conversation with the attendant as they boarded the plane.

She said, ‘Mr. Williams, Mr. Williams’ friends, welcome. This is your plane for the day.’ She said, ‘What I want to tell you is that Snoop Dogg uses this plane.’ She said, ‘What I am saying is you can do anything.’ We all kind of looked at each other, you know, we are in our forties now. And Robby’s friend Brandon says, ‘Can we stand up as the plane lands?’ 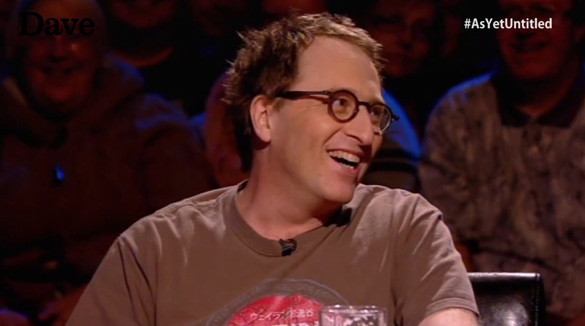 Jon Ronson recounting his UFO adventure with Robbie Williams on As Yet Untitled. (Credit: Dave/As Yet untitled)

Williams has faced a lot of scrutiny by the media for his UFO interests. Although many celebrities, including Dan Aykroyd, William Shatner, Rihanna, Katy Perry, Sammy Hagar and many others have expressed interest in UFOs, none seem to receive as much attention for their interest as Williams.

He has occasionally alluded to curbing his UFO hunting activity. According to Digital Spy, he has said that his interests in UFOs made him “weird and fat.”

Williams said, “I got a bit burnt out and I was looking for something else. I thought that something else was making documentaries about UFOs. But that wasn’t going to work out for me. It just made me weird and – at the time – fat. Weird and fat, looking at UFOs.”

Although it may have made him weird and fat at the time, he seems to continue pursuing his UFO interests. He reportedly has bought an island in California and says it is a great spot for UFO watching, and has recorded a duet with Michael Bublé in which the song is about UFOs.

I think I can safely speak for the staff at Open Minds, and for many of our readers, when I say that we would go UFO hunting with Williams anytime. Stay strong, Robbie! We got your back!