An Australian witness near Melbourne reported watching and videotaping a triangle-shaped UFO with circular, colored lights, according to testimony in Case 58119 from the Mutual UFO Network (MUFON) witness reporting database.

“It was emitting lots of different colors and was hovering in one spot,” the witness stated.“The thing that made me notice it is that I’ve never seen such displays of color and hovering/movements of this object in other airborne craft such as planes and helicopters.” 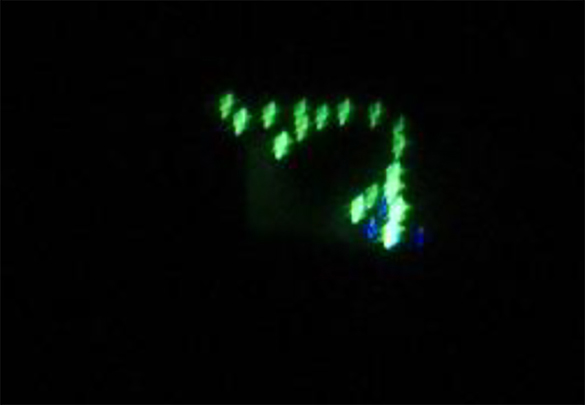 The witness watched the object for more than an hour.

“I observed it for a long time. It would hover in one spot blinking different color light patterns, and then it would move straight down, sometimes sideways in a rapid motion, or slowly at other times.”

The witness decided to try and photograph the object. 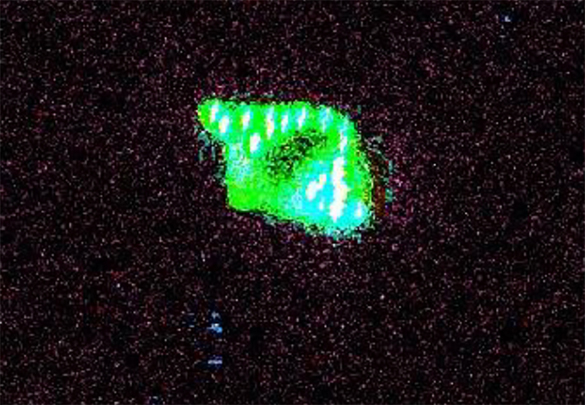 “I kept trying to take photos of it on my iPhone which wasn’t giving me very good results. I went inside the house to get my partner to come outside to show her this object. She got her Nikon camera with a zoom lens, and did her best to get the camera to focus on this object, which was proving difficult. She managed to take a few photos that came out really well which showed a triangular-shaped object with lights along the edge. It was not possible to judge the shape of the craft with the naked eye. I also tried to take video footage on my iPhone. It was difficult to hold the phone perfectly still, and I ended up resting my arm on a table in order to hold the phone as still as possible. I also tried to include the clothes line as a reference point and to be able to judge the objects movements.” 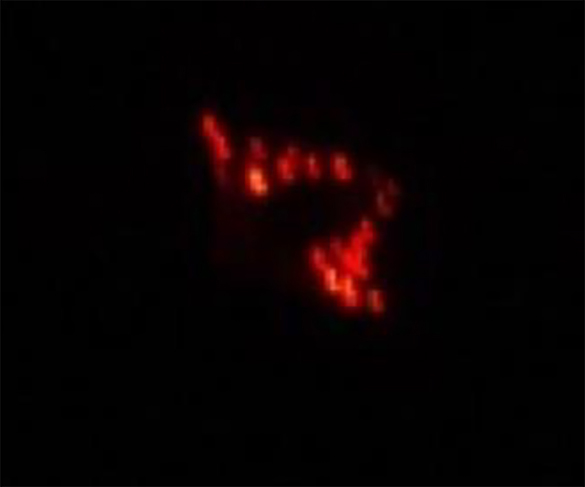 “After observing it for some 80 minutes, the object slowly moved lower and lower and away from my vantage point until I could no longer see it over the trees. It was difficult for me to tell whether it landed somewhere or just disappeared over the horizon. During the sighting I was puzzled and kept trying to imagine what it could possibly be, as I had never seen anything resembling what I observed.”

Justin Busuttil investigated for MUFON International and closed this case as an Unknown.

“The witness has provided numerous photographs and video footage of a triangle-shaped object illuminated by colored, circular lights which changed color over Glen Huntly, Victoria,” Busuttil stated in his report.“The witness was in his backyard at the time of the event so he could smoke a cigarette. The object was also witnessed by the witness’s partner who took a number of the photographs provided.” 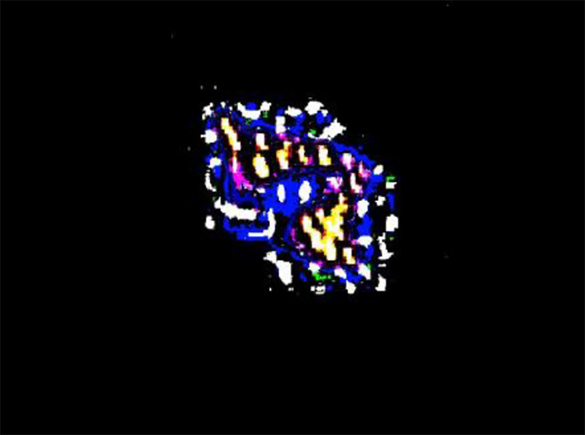 “Analysis of the photographs provided shows the object as being triangular in shape and illuminated by a number of circular lights that change colors (red/green/blue). The object does not resemble any known commercial aircraft or any conventional military aircraft. Investigation has identified another report made to the Victorian UFO Action (VufoN) where a sighting was reported by an independent witness whose description and photographs provided which support the account. The object appears to be solid, it appears to be moving and not stationary, and has not been able to be identified. There is no evidence or indication the witness has falsified his account of the event or the photographs provided.”

Editor’s note: The still images are closeups of the object being recorded by hand, so they most likely do not accurately reflect the shape of the object. The witness admits it was hard to hold the phone still. Shaking can be seen in the video. That would mean that the images, which are stills from the video, are distorted from motion blur. This sort of blur could make a single light, or a couple of lights, look like a group of lights. You can see this effect yourself by trying to make a video with your phone of a point of light while holding your phone with your hand. Then zoom in on a still of the object in your video.