Home / Articles / UFO News / Australian newspaper poll shows most readers believe in aliens
response to the initial reports about the mysterious lights prompted the paper to place a poll on its website, which posed the question, 'Are aliens visiting Earth?' 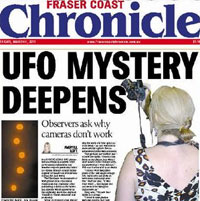 Several residents of Maryborough, Queensland, on Australia’s east coast, reported seeing strange lights in the sky earlier this month. According to local newspaper the Fraser Coast Chronicle, their office has been flooded with calls and messages from people who witnessed the lights, people concerned about the lights, and people who claim to have interacted with extraterrestrials.

The overwhelming response from readers in response to the initial reports about the mysterious lights prompted the paper to place a poll on its website, which posed the question, “Are aliens visiting Earth?” An incredible 60 percent of the poll’s nearly 2,000 participants thinks that extraterrestrials are visiting Earth. Perhaps more surprising is that 20 percent claim to have met an extraterrestrial.

While the Chronicle‘s poll is non-scientific, the results are still surprising.