Dr. Stephen Hughes, an astrophysicist at the Queensland University of Technology in Brisbane, conducted a detailed study of a large meteor event that took place over Brisbane in 2006. While this meteor shower was taking place, a farmer in Queensland spotted two green balls of light descending from the sky. While one of these orbs descended directly downward to the ground without further incident, the second orb seemed to roll down a hill and bounce over a rock before disappearing, according to the farmer. Hughes believes the first orb was simply a bright meteor, while the second orb was probably ball lightning caused by the meteor, even though the event occurred on a clear night. 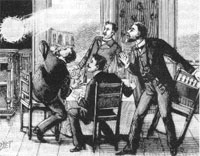 Hughes explains that as debris from comets passes through atmospheric gas, it can ionize this gas, which increases the current that normally flows between the ionosphere and the ground, resulting in ball lightning. Scientists have differing opinions regarding ball lightning however, as the phenomenon is still not fully understood.

As he told the BBC, Hughes believes, “If you put together inexplicable atmospheric phenomena, maybe of an electrical nature, with human psychology and the desire to see something – that could explain a lot of these UFO sightings.”

The findings of Dr. Hughes’s study appear in Proceedings of the Royal Society.