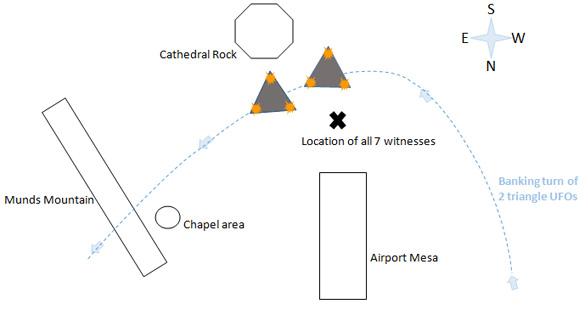 The event occurred about 10 p.m. on June 22, 2015, as the Director of UFO Sightings Tours was with six tour clients with military night vision goggles.

“We all saw two large, amber colored, triangle shape, hard edge, structured objects with our naked eyes,” the reporting tour guide witness stated. “These traveled from the northwest area of the sky beyond Airport Mesa in a southward direction toward Cathedral Rock.” 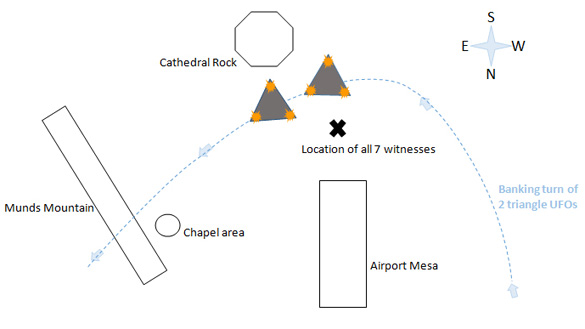 The seven witnesses were standing together on Chavez Ranch Road turnout area. The witness described the object’s movements.

“The two triangle objects then made an arching turn as they headed easterly toward the Chapel of the Holy Cross area and then disappeared to the north over Munds Mountain. All witnesses were absolutely astonished and continued to discuss the sighting event for the duration of the tour.”

Four of the witnesses had good descriptions of the object.

“Four of the witnesses clearly saw that these were two distinct structured, hard edged, dark triangle-shaped craft each with three amber or orange-colored lights on the bottom and one light at each corner.”

Both craft were seen by the four witnesses with their naked eyes without the use of the Night Vision goggles. Two other witnesses saw them at close range but initially through the goggles and could not make out the shape, only that they were huge bright lights. 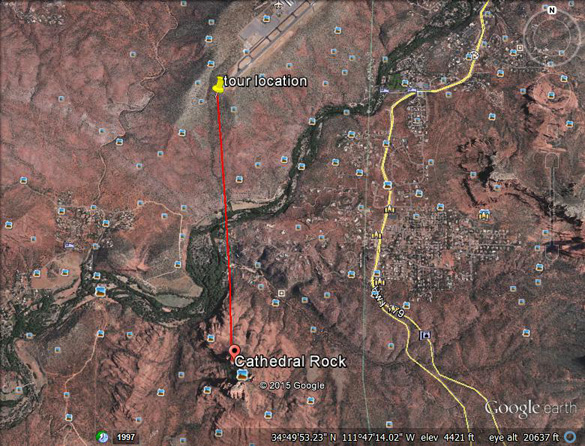 “One of these witnesses is a retired airline pilot with over 40 years of professional experience. He stated emphatically that these two objects were remarkably faster than any plane he’d ever seen and that they were very low, much lower than commercial aircraft. When these two witnesses lowered their goggles during the sighting, they and I together saw that these were two very large, amber colored lights, but unfortunately we did not see the distinct triangle shapes, each with three lights in their corners, as did my other four clients. All seven of us did see the two objects make an arched turn while banking and continued to watch them as they disappeared over Munds Mountain in the distance.”

The witness provided a diagram of the sighting – shown on this page.

“Additionally, when these two craft were on initial approach, at the same time, a military jet at very high altitude passed over us and then another one did again as these two objects headed northeast. All seven witnesses commented that the two UFOs were considerably lower than either of the two jets. While we had no way of knowing if the two military jets were in pursuit of the UFOs, their flight path was towards the approach of the two unknown objects. It is difficult to judge the distance of the unknown objects from us, but all the witnesses expressed that the UFOs were at most a few thousand feet, or less above us. All six clients expressed that they are willing to be interviewed and contact information can be provided. Unfortunately we were all caught up in the sighting and no photos or videos were achieved. Darn it! Better luck next time.” 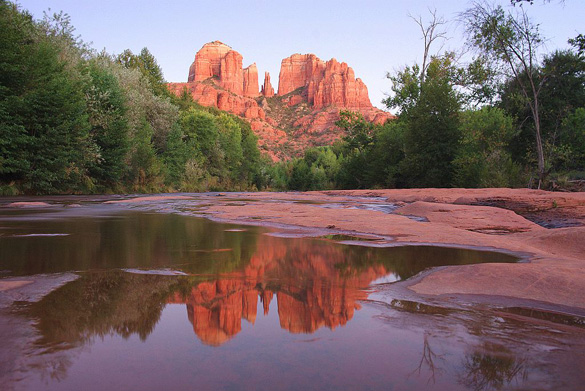 Sedona is a city that straddles the county line between Coconino and Yavapai counties in the northern Verde Valley region of Arizona, population 10,031. Please remember that most UFO sightings can be explained as something natural or man-made. The above quotes were edited for clarity. Please report UFO activity to MUFON.com.