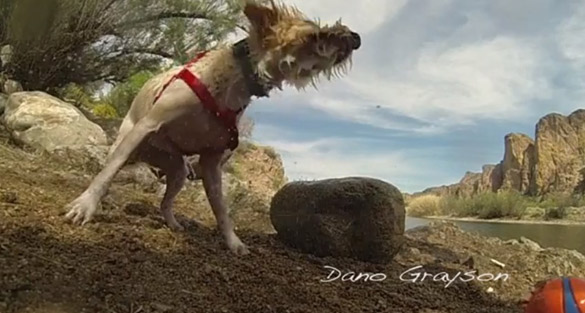 While filming his dog shake off water in HD, an Arizona man believes he caught a UFO as well. The YouTube site is owned by Dano Grayson, and he has a lot of beautiful HD videos from around the Arizona area. In this video his camera appears to be on the ground, his dog comes walking up from a river and shakes himself off.  At normal speed there doesn’t appear to be anything out of he ordinary. However, when he slows down the video, you can see a small object shoot out of the corner of the screen and zoom across the sky. In some of the comments people have suggested it is a bird, bug, jet, or a hoax. Take a look and decide for yourself.

To help demonstrate that he is genuine and not a hoaxster, Grayson posted a video today showing how he extracted the clip from his raw GoPro footage.

I would also argue that this sort of video does not fit the hoaxing profile. By looking at his other uploads you can see that he is often taking videos of Arizona landscape. I might add he does a great job of it. This video fits along those same lines. With a hoax, often the other uploaded videos are sketchy UFO videos, or the hoax video is the first and only one to be uploaded by an anonymous person. While the video may be of something mundane, like a bug, bird or jet, it does not fit the profile of a hoax.

Either way, he has a lot of beautiful videos, and I love watching his dog, Tequila, shake off the water in slow motion.