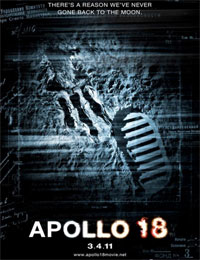 The poster for yet another upcoming extraterrestrial-themed movie has just surfaced. The movie has not even begun shooting, but a promotional teaser poster has been released for Apollo 18. But the film has a short promotional window, being that the film’s producers have only three months until its scheduled release date.

Apollo 18 will reportedly be a “found footage” type of movie (think Blair Witch or Paranormal Activity). The “found footage” in this thriller shows a secret manned lunar mission that encountered extraterrestrials with disastrous results, which is hinted at by the movie poster’s tagline—”There’s a reason we’ve never gone back to the moon.”

The movie has a scheduled release date of March 4, 2011. More information about the film will be posted on the recently launched website www.apollo18movie.net.