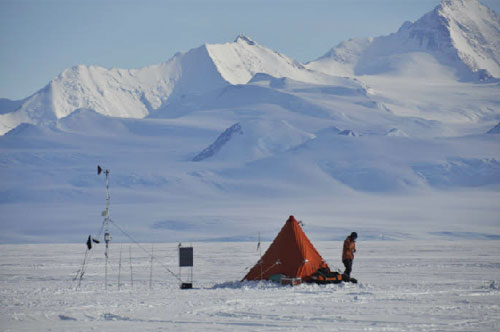 A team comprised of British scientists and engineers plan to drill through nearly two miles of solid ice to reach the subglacial Lake Ellsworth to “search for life forms in the water and clues to past climate in the lake-bed sediments,” according to the project’s website.

CNN explains that scientists believe this lake, and others like it, “could be home to micro-organisms unknown to science, potentially holding secrets to the origins and limits of life on Earth.” And by learning about these micro-organisms, scientists could expand their understanding of “the possible conditions for extraterrestrial life, in locations such as the bodies of water thought to exist beneath the surfaces of icy moons of Saturn and Jupiter.”

The team spent the past sixteen years developing this project. Drilling is scheduled to begin in December 2012, at which time one-hundred hours of non-stop, hot-water drilling will take place. When the deep hole to Lake Ellsworth is complete, the team has only twenty-four hours to sample the lake before the hole re-freezes.