NASA's camera went down after another UFO was spotted, leading to allegations of a cover-up. 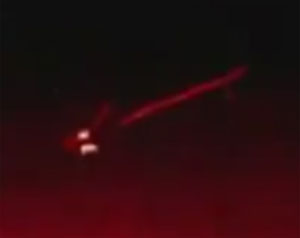 A strange object appeared in NASA footage on May 3rd leading some to conclude that an alien spacecraft was hanging out by the Sun. This comes just two weeks after a similar object appeared by the Sun in footage captured by NASA’s Solar and Heliospheric Observatory (SOHO) on April 24th.

The Naval Research Laboratory (NRL) analyzes data from SOHO’s camera, and the NRL explained that the April 24th UFO was simply a camera glitch caused by cosmic rays. This new UFO is similar in appearance to the object captured on April 24th. And with the similarities, it is possible that this new UFO is also a result of cosmic rays.

But an added element to this new UFO spotting has at least one person suggesting a NASA cover-up. Gizmodo UK explains, “A day after the UFO was captured, NASA shutdown the probe’s feed because it, oh so conveniently, went into ’emergency Sun reacquisition mode.'” Fox News reported NASA’s official response to this:

SOHO went into ‘Emergency Sun Reacquisition’ mode on Friday May 4, 2012, caused by a false trigger of the Coarse Sun Pointing Attitude Anomaly Detector. We are working on the recovery of the spacecraft to normal mode.

YouTube user Rob19791 is credited with spotting the most recent solar UFO. In his video of the object, he alleges that NASA took SOHO off-line to prevent anyone else from seeing the UFOs. He suggests, “It’s too much of a coincidence I find this on the 3rd of May 2012, and they break their telescope the following day.”

What are your thoughts? Do you accept the NRL’s explanation for these odd objects? Did SOHO’s camera really have difficulties, or is something more sinister transpiring? We would love to hear your opinions. Share them with us on the Open Minds Facebook page.