Home / Articles / UFO News / Alien invasion would be like ‘Bambi meeting Godzilla’ according to Michio Kaku
Kaku says extraterrestrials are likely friendly, but we wouldn't stand a chance against them in a battle. 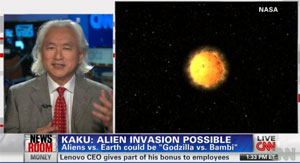 Theoretical physicist Michio Kaku appeared on CNN Newsroom on July 19 to discuss extraterrestrial life. He offered his opinion that, if we encounter extraterrestrials, they are likely to be friendly.

But, if humans ever have to face hostile extraterrestrials in battle, he thinks “it would be like Bambi meeting Godzilla.”

He supports this claim by stating, “If they’re that advanced . . . they can reach the earth from a distant star . . . they are already thousands of years ahead of us in technology, and we would present no military challenge to such an advanced civilization.” And although Kaku believes the more optimistic view that extraterrestrials are benevolent and will simply leave us alone, he cautions, “We have to prepare for the possibility that they’re not.”