NASA has approved its mission to hunt for signs of extraterrestrial life on Jupiter’s moon Europa. While this first mission is a probe, other projects are well underway to develop robots that will drill through the moon’s icy surface and explore the vast alien oceans below. 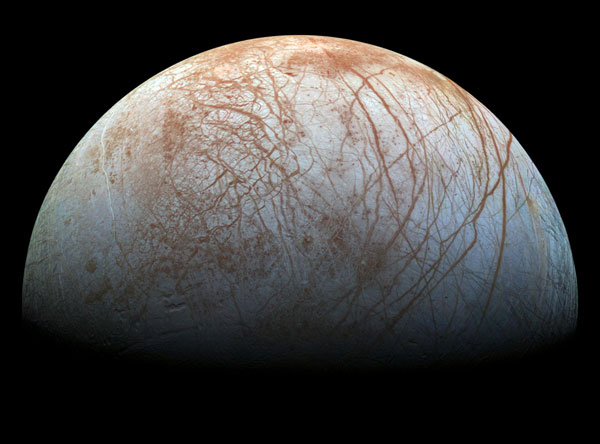 NASA announced this week that the Europa mission has moved from concept to development. They are planning to launch a spacecraft in the 2020s.

Evidence that Europa has an ocean below its frozen crust was discovered during the Galileo mission in the late 1990s.

In a promotional video posted earlier this week (seen above) by NASA’s Jet Propulsion Laboratory (JPL), Claudia Alexander, Galileo Project Manager from 1999 to 2003,says: “We might be actually looking at a body that is presently alive, presently active and presently undergoing its geology. There is too much evidence right now lying around on the surface, the red stuff, that suggests that something’s going on there. Is that an environment that is habitable for any sort of life form?”

“By golly, we really have got to go back and figure that out,” she exclaims. 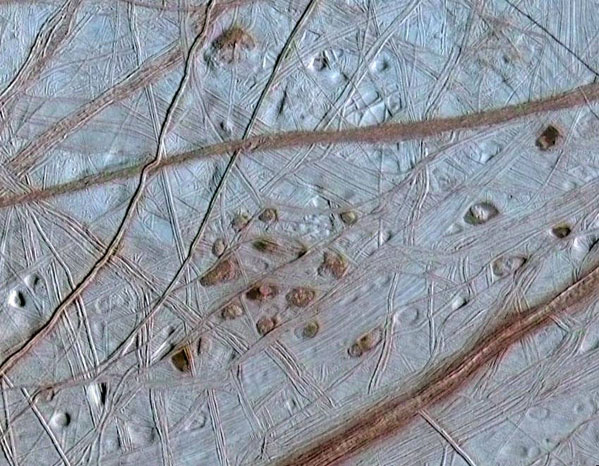 Robert Pappalardo, Europa Mission Project Scientist, agrees, “Europa is the most likely place to find life in our solar system today because we think there’s a liquid ocean beneath its surface and we know that on Earth everywhere there’s water we find life.”

The approved mission gives the go ahead for the development of a probe that, once launched, will take several years to reach Jupiter. It will then go into orbit and conduct 45 close flybys of Europa. During those flybys, according to NASA, the craft will “image the moon’s icy surface at high resolution and investigate its composition and the structure of its interior and icy shell.”

According to Space.com, the spacecraft will also look for suitable places to land. 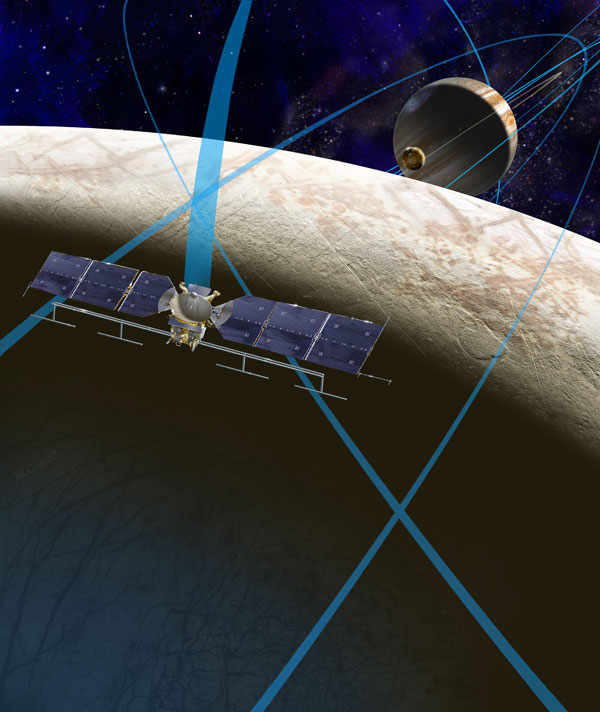 Artist’s concept of the Europa Clipper mission concept, which would send a probe to do multiple flybys of the ocean-harboring Jupiter moon. (Credit: NASA/JPL-Caltech)

Louise Prockter, a planetary scientist at Johns Hopkins University Applied Physics Laboratory and Pre-Project Deputy Scientist for the mission, told Space.com, “Assuming Europa is found to be potentially habitable, the next mission that follows may be able to land and perhaps try to get beneath the ice.” 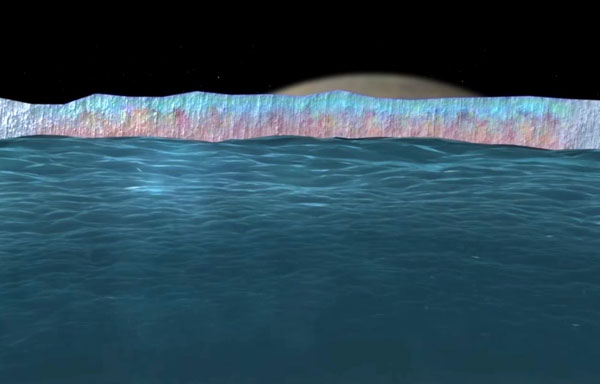 “One major challenge is how such a probe would be able to communicate to the surface once it starts to descend,” says Prockter. “The cryobot would also need to be able to withstand significant pressures underneath the ice. We’re still a long way from having the technology to do that.” 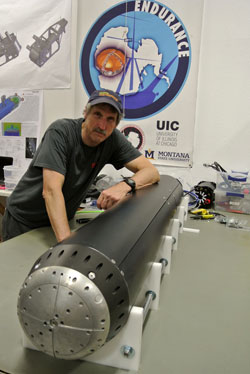 Or are they? A company called Stone Aerospace has a NASA funded cryobot project that is already underway. Their cryobot is named VALKYRIE (Very deep Autonomous Laser-powered Kilowatt-class Yo-yoing Robotic Ice Explorer) and is funded by NASA’s Astrobiology Science and Technology for Exploring Planets (ASTEP) program.

VALKYRIE uses lasers to heat the ice and melt its way through. The VALKYRIE cryobot spawned from another NASA funded project by Stone Aerospace. That project developed a robot to explore underwater sinkholes using fiber optics to relay data.

Bill Stone, an experienced explorer, caver,  engineer, and founder of Stone Aerospace, says one day he had a thought. “It was like a lightbulb went off,” says Stone.

Previous cryobot designs used onboard power supplies, which weighed down the devices and made them bulky. He figured he could use his fiber optics instead, which would allow him to leave the power supply and other heavy equipment on the surface.

According to Space.com, “The cryobot uses the laser energy to heat water with which to melt the ice in front of it, while the water re-freezes behind it around the fiber.”

In a test in 2004, the VALKYRIE descended to a depth of 31 meters. However, Stone says it is capable of much greater depths.

“We’ve been doing a 5 kilowatt test only because of budget limitations,” he says. “I can build, today, a 250 kilowatt laser-powered cryobot. It would cost more money but we could illustrate it in Antarctica and show that we can go through kilometers of ice.”

Another advantage of this technology is that it will be able to drill directionally. Similar methods are used today to drill for oil. Instead of drilling downward, if the oil under land you cannot get to on the surface, you may have to drill laterally.

This would be helpful for a mission to Europa in order to explore what appears to be geysers that were spotted by the Hubble telescope in 2013. It would be too dangerous to land near them, but VALKYRIE could be deployed at a safe distance from the geysers and drill over to them. 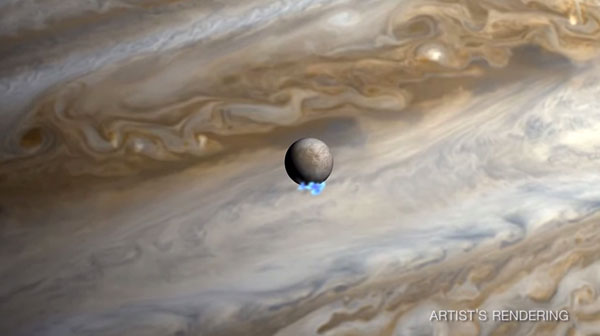 Stone says, “If you got to Texas where they are drilling for oil, they can collect the oil laterally from kilometers away, and we want to do the same thing with the cryobot and steer off the vertical descent line and maneuver over and detect the sources of the geysers.”

Getting through the ice is just the first step, but Stone Aerospace also has an innovative hydrobot to explore the oceans once they get below the ice. They call it ARTEMIS (Autonomous Rover/airborne-radar Transects of the Environment Beneath the McMurdo Ice Shelf).

Space.com writes: “ARTEMIS is the primary vehicle in a NASA/ASTEP project named SIMPLE: Sub-ice Investigation of Marine and Planetary-analog Ecosystems.”

ARTEMIS is designed to be an underwater mothership. It will be able to deploy smaller probes to explore multiple areas of interest at once. 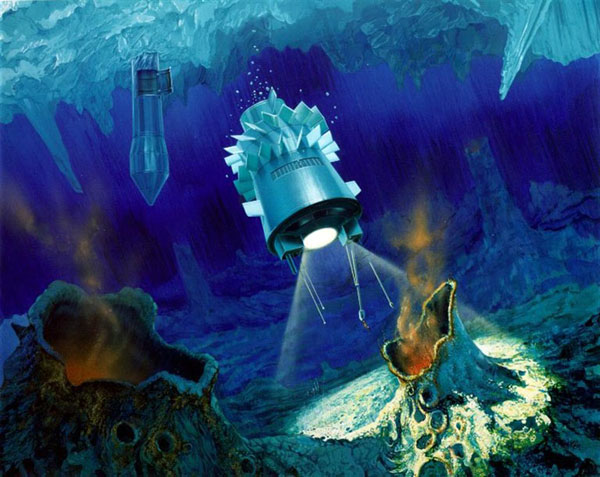 Artist’s concept of the cryobot and hydrobot. These robots are in the very initial stages of design and may look very different as the robot design evolves. (Credit: NASA/JPL)

It is still unknown what will be found on Europa, but the technology exists to explore above and below the ice. Now that NASA has approved the first step to finding out what mysteries lie hidden on this ice moon of Jupiter, we are that much closer to finding out.

It is hard not to let the imagination run wild, with ideas of large alien whales, or mysterious glowing jellyfish, but even the discovery of a simple one celled organism holds incredible implications.

In the recent NASA video, Pappalardo talks about the implications of the discovery of life on Europa. He says, “If there is life in Europa, it almost certainly was completely independent from the origin of life on Earth. That would mean the origin of life must be pretty easy throughout the galaxy and beyond.”