Home / Articles / Alien Autopsy Part II: An Alien Body Talks
Only five people have ever seen the first alien autopsy, which was never released to the public.

Only five people have ever seen the first alien autopsy, which was never released to the public. 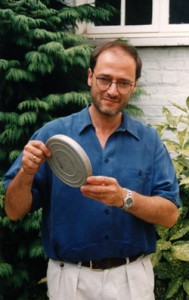 I spent the morning strolling in the center of London, visiting the always- elegant Burlington Arcade close to Piccadilly Circus and Oxford Street, and buying a couple of fairly rare and old UFO books. Then I prepared myself for the meeting, scheduled at 12 noon in Santilli’s office. Ray was with his friend Reg Presley, the former lead vocalist of the English rock band The Troggs, which was a huge success in the 60s with many hits such as “Wild Thing,” which reached the top of the charts.

I knew Reg had to be there because of his great interest in UFOs, so we immediately sympathized and recalled the old times, when I was a young adolescent crazy for “With a Girl Like You” that he sung with a strange nasal accent.

Santilli had reserved a table in a fancy Chino/Hawaiian restaurant. Wines and meal were sumptuous, and on our way to the office I started talking to Reg about the actual identity of the ex-military camera operator who supposedly shot the images. Reg told me not to search for any “Jack Barnett,” but for a certain “Jack Snow,” whose name Santilli had revealed to him some time before. The fundamental question was if there ever was a real cameraman… 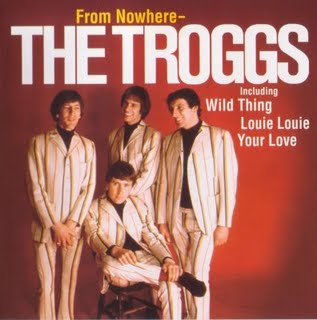 Reg Presley is sitting down in the middle.

Around 2 p.m., Reg Presley and I were sitting in Santilli’s office ready to be shown a memorable spectacle. Santilli was very thrifty in introducing the viewing, “This is the first autopsy” he said, and he pushed the videocassette in the VCR. As the first images appeared in the not-so-large TV screen, we both got quite shocked. Even in their fuzzy and grainy black and white, the images were gory and graphic to the point that, from time to time, we had to take a deep breath before watching again. 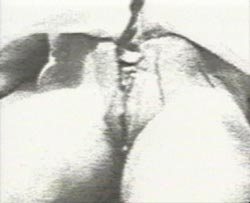 Image from first autopsy, vertical incision from the chest to the lower abdomen.

The autopsy incision was vertical, starting from the neck and going straight down to the lower belly. A “gynecological” examination was performed and, through a long tool similar to a dissecting or surgical forceps, a white filamentous substance was extracted.

After the ribcage was open (which is not visible in the images), a shiny arrow-shaped object was removed from the chest cavity. The same object appears in the “officially released” Santilli Alien Autopsy film. As I stated on several occasions, the being of this first autopsy appeared to me slightly different from the one that we see in the famous footage.

In fact, this first autopsy film equally shows a six-fingered body depicting typical human female external features and a swollen belly, and does not show any injury, like the extensive gash in the right leg of the creature seen in the released footage. 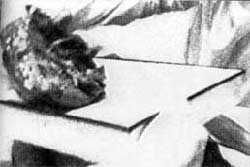 Image from the first autopsy, removal of unknown organ.

The images went fast, too fast, and in less than 12 minutes, the screen went black again. End of viewing.

I think in that moment I saw Reg Presley trying to stop the tears. He was very emotional and remained silent, but I shouted my gut’s reaction because that was not enough for me and I wanted to see it again. So, I provoked Santilli, saying “I think it was a human being.”

“Are you joking?” he replied. I insisted, “the expression on the face, and the body structure, it all seemed to me very human, but that was too short, I have to see it again.” We both then requested firmly to again see the film and Santilli unwillingly accepted. In that moment, I was sure that in no way could it be a hoax. As far as the rest of the materials, Santilli was clear we would possibly see them in the near future, but not this time. 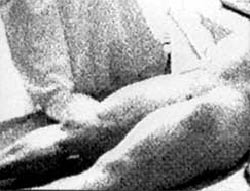 First autopsy image. The right leg is intact, as opposed to the same area on the second autopsy which was released to the public. 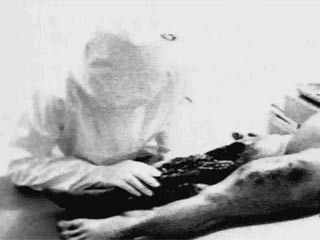 Image form the second autopsy, showing damage to the right leg, which can not be seen in the first autopsy (above).

Around 7 p.m., I was leaving the London Heathrow Airport, and two hours later I was back in my home in Rome. I was then overwhelmed by an emotional crisis because of the strength of what I saw in London that afternoon. So I described the being to my wife at the time, Wendy, and she created an excellent artistic rendition of the body. The drawing appeared on the magazine “Notiziario UFO” that I was editing, and it still remains the only image of the First Autopsy. 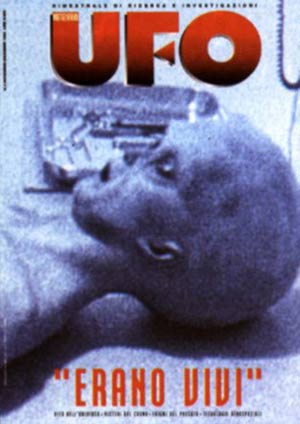 A Real Autopsy at the Morgue in Rome

I had to consider the situation very carefully during the next several days. I needed to make a comparison between the alleged non-human body I saw dissected in the footage, and the body of a human being under autopsy. Was our anatomy completely different? 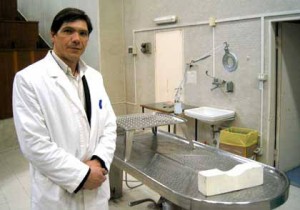 I contacted my friend Massimo Signoracci, who was (and still is) a very famous technician in forensic pathology at the Institute of Forensic Medicine at La Sapienza University in Rome. Massimo’s family has been embalming since 1870. They embalmed three popes and other famous figures including the former Italian Prime Minister Aldo Moro and King Farouk of Egypt. At that time, Massimo Signoracci had performed approximately 1,500 autopsies and had seen 40,000 bodies. He was considered a top authority in forensic science.

I was then very pleased when Massimo invited me to visit him at the university lab on the next day. There were corpses coming every morning. Yes, I was pleased, but frankly a little concerned, too. But I had to go.

The mortuary labs are located in the second floor of a very sober building facing the square of the Verano, the Monumental Cemetery of Rome. Massimo preceded me in the lab, I immediately spotted the body of a woman lying on a slab in one room, and then he escorted me to the last dissection room. There laid the body of a man in his 60s, naked, unattended by anybody. He was an American citizen who died the day before of an apparent stroke while he was walking in the central streets of Rome, near Piazza di Spagna. As prescribed by Italian laws, and in this case, the forensic experts were called to perform an autopsy to establish the cause of death.

Massimo’s expertise was absolutely stunning. Using a sharp knife that he called “Marchiafava” (not a surgical scalpel) he opened the body and dissected it all, removing and evaluating the organs at sight, in a few minutes. Then he concentrated his attention on the heart, which he extracted and put on a metallic pan and started slicing very carefully.

He showed me the reason of that death: black lines, necrotic veins, the indisputable sign of a massive heart attack. Massimo wrote the report and that was it. I will avoid other details for obvious reasons. 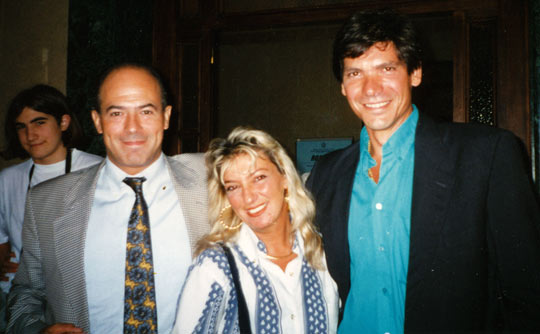 I was later escorted to another room, where two surgeons were performing a dissection, in this case sawing the cranium of a man who shot himself in the head. The operation was conducted with an electric blending saw. It took them a few minutes to confirm the cause of death.

So now I had new evidence that the body I saw in the First Autopsy had nothing to do with the human anatomy. That was enough to convince me to go ahead in my investigation and keep on the tracks of Mr. Ray Santilli. 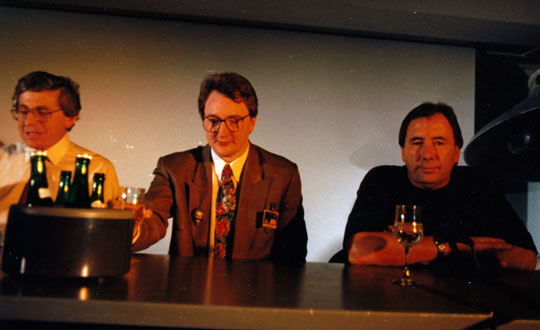 Click here to go back to Part 1 of this series