The full trailer for the upcoming film titled Alien Abduction was recently released. 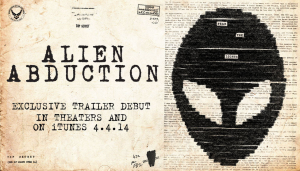 This movie will be in the found-footage format, where the illusion is created that what is shown in the film is real video content shot by the on-screen characters, therefore suggesting that the audience is watching authentic footage. Although some who watch this film will likely fall for this gimmick, Alien Abduction is simply an entertaining independent film being released by IFC Midnight. But, the film’s story is reportedly based on true events.

Alien Abduction is scheduled to hit theaters on April 4, 2014.