An airplane passenger returning home from a vacation in Greece caught some strange lights on video while in the air on approach to Cardiff, Wales.

The sighting was reported by Wales Online. The video was apparently captured on the passenger’s cell phone late Tuesday night. The 29 year-old witness says his plane arrived in Cardiff at about 10 pm. He says the lights were very bright. In fact, he says, “it was the brightest thing I’ve ever seen.” 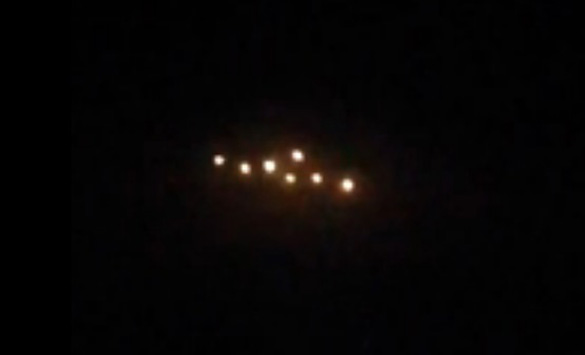 Close-up of the mysterious lights from a still of the UFO video. (Credit: Wales Online)

The witness told Wales Online: “We were flying from Greece to Cardiff. It was on Tuesday night and happened about 20 to 40 minutes before we arrived at 10pm.

“The lights could have been from a few miles away – it was pitch black outside, so it’s hard to say what it was.

“It was quite weird. It was very bright, it was the brightest thing I’ve ever seen. I just realised how bright it was and said to my girlfriend ‘look at that!’

“I was staring at it for a while before I picked up my phone to film it, but it was there for about three or four minutes.

“I thought it maybe could have been lanterns, but they didn’t go away, they kept flying til I couldn’t see them anymore.

“I really have no idea what it could have been – it was just really, really bright.

“UFO is a really broad term. That’s what it is, you know, an unidentified flying object.”

In the video, five out of focus lights can be seen in the distance. Then the witnesses zooms in and the lights come into focus. It is hard to tell if they are moving at all. Then a couple more lights appear, making about eight at once. Some of the lights continue to dim out as others appear.

Wales Online does not speculate or offer any suggestions as to the nature of the lights, but does ask, “What are they?”

The lights are probably not Chinese Lanterns, as lanterns are lit from the ground and stay lit until they get into the sky. Unlike these lights, which lit up in the sky.

However, another possibility is military flares. A couple of miles west of Cardiff Airport is the St. Athan Royal Air Force base. During night time operations flares can be dropped from planes that are working in a covert mode with their visible lights off. I have emailed the Royal Air Force to inquire if indeed they were running exercises at that time. 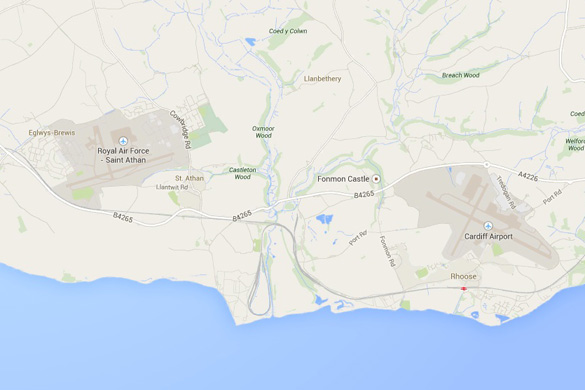 Meanwhile, the lights remain a mystery. The video can be seen on the story by Wales Online here.