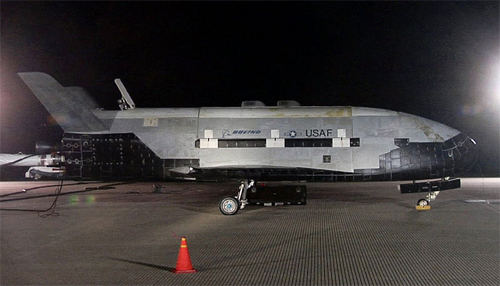 The United States Air Force reports that they are on track to launch an X-37B Orbital Test Vehicle (OTV) mission in late October. This mission will mark the third launch of their secretive X-37B space planes. 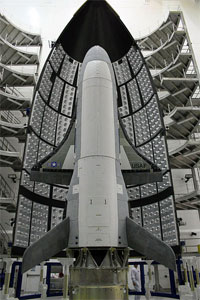 The X-37B at the Astrotech facility in Florida. (Credit: US Air Force)

Major Tracy Bunko of the Pentagon’s Air Force press desk explained to Space.com that, as was the case with the X-37B program’s two previous spaceflights, the payload and mission details of the mission launching in October are classified, “but the focus remains on testing vehicle capabilities and proving the utility and cost-effectiveness of a reusable spacecraft.”

The first OTV mission lasted 225 days in space, while the second mission lasted a record-breaking 469 days in space. But like its cargo and its true purpose, the duration of the OTV-3 mission is unknown. As Wired.com explains, “Its mysterious mission has fueled speculation it could be a spy. China fears it could be an experimental weapons platform or a means to disable satellites.”

The X-37B will launch aboard an Atlas 5 rocket from Florida’s Cape Canaveral Air Force Station.