A UFO makes a scheduled appearance at the Olympics 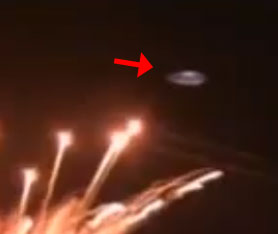 A UFO appeared above Olympic Park stadium in Stratford, east London on Friday, July 27 (technically, it was Saturday, as the sighting took place at approximately 12:30 am) during the Olympics opening ceremony fireworks display.

Approximately one billion people reportedly watched the opening ceremony either on television, on the web, or in person. And it didn’t take long for the Internet to erupt with chatter about the UFO. This unidentified craft is visible in videos from media cameras covering the event, as well as in countless videos from cell phone cameras and personal video cameras taken by onlookers. But a video from The Telegraph garnered the most attention, as it provides one of the best views of the craft slowly floating over the fireworks display.

Although some have described the UFO as “metallic” and “saucer-shaped,” its behavior and appearance bear a strong resemblance to a blimp, and more specifically, a Goodyear blimp. As the Daily Mail explains, “NBC Olympics – a division of NBC Sports – has picked Goodyear blimps for all of its 2012 Olympics aerial coverage.” But oddly, the Daily Mail goes on to say, “The object does not look like one of the floating airships.” 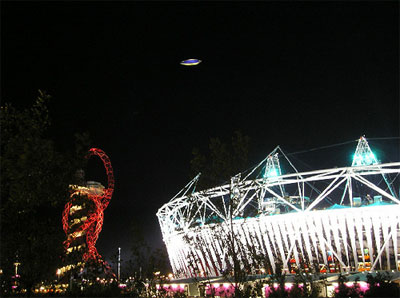 Goodyear blimps have an easily identifiable blue stripe that runs along the blimp’s side. The unidentified craft seen over the fireworks also appears to have a stripe running along its side. Frank Warren of the website The UFO Chronicles points out an additional piece of evidence that supports the blimp theory — Goodyear’s blimp website. This site features blimp photos submitted by users in their “Spot the Blimp” section. And, it just so happens that users have submitted photos of the blimp flying over Olympic Park stadium. The resemblance to the object in the videos is striking.

It was just last month when former British Ministry of Defence UFO investigator Nick Pope suggested that UFOs might be spotted at the Olympics. And although this recent UFO sighting will likely be identified by the UK’s Civil Aviation Authority as a Goodyear blimp, the incident will almost certainly not be the only UFO sighting that takes place during the 2012 Olympic Games.

And just for good measure, here is a terrific photo showing the “UFO” in greater detail: 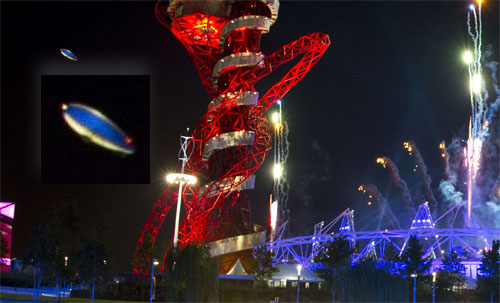