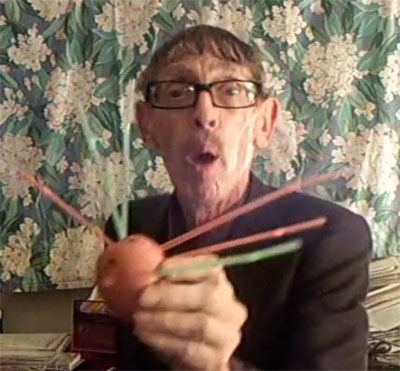 UFOs and other mysterious phenomena are popular topics on U.S. television. With each new season of programming, it seems as though more and more networks are racing to meet the apparent demand for content exploring these intriguing topics. The Discovery network’s Science channel is a prime example of a network embracing shows exploring UFOs and extraterrestrial life. Although the channel has aired several shows addressing these topics, the Science channel is premiering a new show that will probe these mysteries.

Professor Weird is the title of the show premiering on Saturday, August 18. This “weird” professor is theoretical nuclear physicist Dr. Franklin Ruehl. According to Dr. Ruehl, his show “focuses on the scientific evidence for UFOs and ETs, paranormal phenomena, cryptozoological entities, weird crime, bizarre medicine, strange people and anything else of an unusual and fascinating nature.”

The Morgan Freeman-hosted show Through The Wormhole on the Science channel has repeatedly explored the topic of extraterrestrial life. The channel even devoted the entire month of March 2012 to exploring the question: Are we alone?

So is there really a need to air yet another show dealing with these topics?

On his Huffington Post blog, Dr. Ruehl explains, “I feel that the scientific comunity has been myopically narrow-minded concerning the feasilbity of these various subjects. As a Ph.D. in theoretical nuclear physics, I endeavor to bring the scientific perspective to these controversial topics from an open-minded stance.”

The basic description of the show provided by the Science channel reads, “Join Dr. Franklin Ruehl & his devoted assistant on their never-ending quest to obtain off-beat knowledge for their weekly Internet hit: ‘The Realm of Bizarre News.'” It is unclear at the point whether or not Professor Weird will be a series on the channel, but the pilot episode is what will air on Saturday, August 18.