Home / Featured / A fleet of ‘bird-like’ UFOs in Mexico 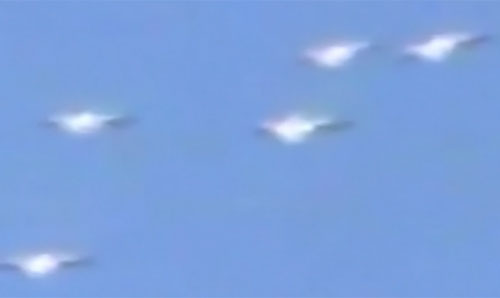 A fleet of ‘bird-like’ UFOs in Mexico

Eight strange UFOs were captured on video over Mexico on January 26. A handful of media outlets published stories about these UFOs, describing them as “bird-like.” The International Business Times describes that the eight objects seen in the video are shown “flying in a synchronised manner which could be mistaken for birds.”

That’s because these UFOs are, most likely, a flock of birds. Pelicans to be more specific.

But the International Business Times continues, “But a closer look revealed that the wing-like structures attached to each object do not flap and the rest of the body seem to emit fluorescent light. The objects change the course of flight together making it appear as if they were controlled by intelligence.”

Agreeing with this sentiment, the website UFO Sightings Daily posted, “At first glance I made the mistake of assuming this was a video of seagulls. I was mistaken. Not a single one of them flap like a bird would. These objects appear to be a fleet of UFOs or even possibly DARPA drones being tested in Mexico. Notice how the UFOs or drones synchronise in flight and clearly show that they are controlled by intelligence. They also look a little like the secret aircraft the TR3B.”

Although it’s possible that these UFOs are some unknown mechanical craft, the evidence suggests these eight UFOs comprise a flock of birds. Even Miguel Aguila, the individual who shot the video, describes the objects as looking like birds. But he, like UFO Sightings Daily and the International Business Times cite the noted lack of wing flapping to rule out birds. Several birds, however, have the ability to glide through the sky for extended periods without flapping their wings. The American white pelican is one such bird, and it bears a striking resemblance to the objects in the video.

According to the University of Michigan’s Museum of Zoology, “American white pelicans fly gracefully, spreading their wings and sliding onto the water on their feet as they land. Flight is usually in linear formations or forming a ‘V.’ They flap and glide and may soar on days when they can take advantage of updrafts.”

With everyone describing these UFOs as “bird-like,” if they look like pelicans and soar like pelicans, then they are probably pelicans. And if you’re doubtful, watch these videos of pelicans in flight: