A former resident of Novi, Michigan is still traumatized by a UFO encounter from decades ago. 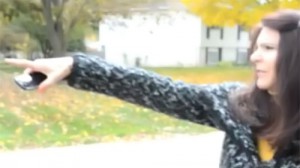 Nancy Tremaine says she saw a saucer-shaped UFO floating in the sky above her neighborhood in the early 1960s when she was just twelve years old. She can’t remember exactly when the sighting occurred, but thinks it was during the summer of 1961. She says that she was playing at a friend’s house when the friend’s father called the girls outside to see the UFO. She describes the craft as a silver saucer-shaped object, adorned with red, green, and white lights. And she says these lights were either rotating or pulsating.

Tremaine says the next thing she saw was a light beam shooting down from the UFO onto the unmarked police car of an off-duty officer who was doing security at a nearby construction site. According to local news site HomeTownLife.com, former Novi Police Chief Lee Begole was on duty at the police station on the night of the sighting. He acknowledges that dispatch received a call from the off-duty officer at the construction site. Begole remembers, “He called into dispatch and said there was a strange object overhead.” Dispatchers reportedly received multiple calls from other witnesses that night, one of whom was the wife of a city council member. 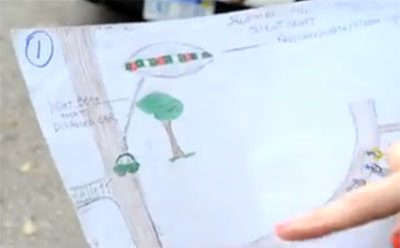 After seeing the beam of light shooting down from the UFO, she recalls that her friend’s father told her (Tremaine) to run home. That’s when the event allegedly became more than a simple sighting of an unknown craft. Tremaine claims that, as she was running home, she felt a sensation “like being shocked.” The next thing she remembers is being in her house. She claims she was abducted by the UFO. Although she doesn’t remember much about the encounter, she says some of the experience has been coming back to her lately as a result of regression therapy.

She recently stated, “It was a very traumatizing experience that stayed with me,” and she claims she’s been taken by UFOs several times, but the experiences are never “harmful or scary.”

Hometown/Observer & Eccentric photojournalist John Heider recently joined Tremaine as she returned to the location in Novi where the 1961 event occurred. Watch his interview with Tremaine at the top of this article.

HomeTownLife.com explains, “She’s asking Novi residents if they remember that night, and if so, would they reach out to her. Putting together the pieces is one step in her healing process.”